Posted by viviandunlo on Monday, 22 February 2016 in Earth Violators 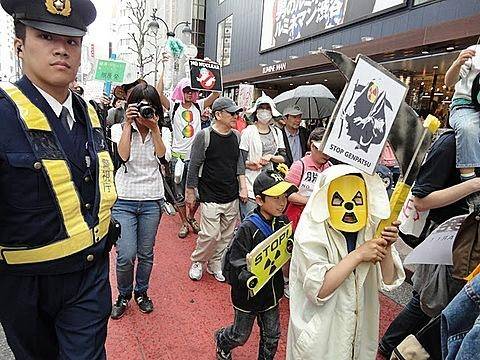 The Japanese were kept in the dark from the start of the Fukushima disaster about high radiation levels and their dangers to health, writes Linda Pentz Gunter. In order to proclaim the Fukushima area 'safe', the Government increased exposure limits to twenty times the international norm. Soon, many Fukushima refugees will be forced to return home to endure damaging levels of radiation.

Dr. Tetsunari Iida is the founder and executive director of the Institute for Sustainable Energy Policies (ISEP) in Japan.

As such, one might have expected a recent presentation he gave in the UK within the hallowed halls of the House of Commons, to have focused on Japan's capacity to replace the electricity once generated by its now mainly shuttered nuclear power plants, with renewable energy.

But Dr lida's passionate polemic was not about the power of the sun, but the power of propaganda. March 11, 2011 might have been the day the Great East Japan Earthquake struck. But it was also the beginning of the Great Japan Cover-Up.

On the ISEP website, Iida extols the coming of the Fourth Revolution, following on from those in agriculture, industry and IT. "This fourth revolution will be an energy revolution, a green industrial revolution, and a decentralized network revolution", he writes.

But in person, Iida was most interested in conveying the extent to which the Japanese people were lied to before, during and after the devastating nuclear disaster at Fukushima-Daiichi, precipitated on that same fateful day and by the deadly duo of earthquake and tsunami.

"Shinzo Abe says 'everything is under control'", said Iida, speaking at an event hosted by Nuclear Free Local Authorities, Green Cross, and Nuclear Consulting Group in late January. It was headlined by the former Japan Prime Minister, Naoto Kan, who was at the helm when the triple disasters struck."Yes - under the control of the media!"

The media may have played the willing government handmaiden in reassuring the public with falsehoods, but in July 2012, the Fukushima Nuclear Accident Independent Investigation Commission concluded that the disaster was really no accident but "man-made". It came about, the researchers said, as a result of "collusion" between the government, regulators and the nuclear industry, in this case, Tepco.

"There should be a Tepco trial like the post-war Tokyo Trials", Iida said, referring to the post World War II war crimes trial in which 28 Japanese were tried, seven of whom were subsequently executed by hanging.

Hope for such accountability - without advocating hanging - is fleeting at best. In 2011, while addressing a conference in Berlin hosted by the Heinrich Böll Foundation, I suggested the Tepco officials should be sent to the International Criminal Court at The Hague, (a body the US still conveniently refuses to recognize) to answer for what clearly amounts to crimes against humanity.

The remark caused a bit of a stir and earnest questions about the mechanism by which Tepco could be brought there. Needless to say, nothing of the kind ever happened, or is likely to.

Instead, the Abe's government's preferred tactic is to go full out to restart reactors and move everybody back home as soon as possible, as if nothing serious had happened. Just scoop off a little topsoil, cart it away somewhere else and, Abracadabra! Everything is clean and safe again!

Of course radiological decontamination is not that easy. Nor is it reliable. It is more like"pushing contamination from one spot to the next", as independent nuclear expert, Mycle Schneider describes it. And radiation does not remain obediently in one place, either.

"The mountains and forests that cannot even be vaguely decontaminated, will serve as a permanent source of new contamination, each rainfall washing out radiation and bringing it down from the mountains to the flat lands", Schneider explained. Birds move around. Animals eat and excrete radioactive plant life. Radiation gets swept out to sea. It is a cycle with no end.

Nevertheless, efforts are underway to repopulate stricken areas, particularly in Fukushima Prefecture. It's a policy, and now a practice, of 'normalizing' radiation standards, to tell people that everything is alright, when clearly, there is no medical or scientific evidence to support this. And it was an approach already firmly and institutionally in place, even on March 11, 2011 as the Fukushima disaster first struck and much of the decision-making was left to individual judgement.

"We were told that evacuating poses a greater risk than radiation," recalls Hasegawa Kenji, a farmer from Iitate, a village situated 45 kilometers from the Fukushima nuclear power plant. Featured in the Vice documentary 'Alone In The Zone', Hasegawa criticizedIitate's mayor for making what he called a terrible mistake.

"Even when the scientists told the mayor that Iitate was dangerous, he ignored them all. He brought in experts from around the country who preached about how safe it was here. They said we had nothing to worry about. They kept telling us that. Eventually the villagers fell for it and began to relax. And the mayor rejected the idea of evacuating even more. That's why nobody left, even though the radiation levels were so high."

The nuclear industry did not tell the public the truth

The confusion surrounding evacuation was so profound that, as Zhang et al. noted in a September 11, 2014 study published in the International Journal of Environmental Research and Public Health: "Unclear evacuation instructions caused numerous residents to flee to the northwestern zone where radiation levels were even higher."

All par for the course, said Iida. "I must emphasize, the people in the nuclear industry did not tell the public the truth and keep us informed."

Next in the 'normalization' process came the decision to raise allowable radiation exposure standards to 20 millisieverts of radiation a year, up from the prior level of 2 mSv a year. The globally-accepted limit for radiation absorption is 1 mSv a year.

This meant that children were potentially being exposed to the same levels of radiation that are permitted for adult nuclear power plant workers in Europe. Some officials even argued that zones where rates were as high as 100 mSv a year should be considered 'safe'. Writing on his blog, anti-pollution New Orleans-based attorney, Stuart Smith,observed wryly:

"Instead of taking corrective measures to protect its people, Japan has simply increased internationally recognized exposure limits. It seems that the priority - as we've seen in so many other industrial disasters in so many other countries - is to protect industry and limit its liability rather than to ensure the long-term health and well being of the masses. Go figure."

All of this set the perfect stage for the Great Repatriation Lie. "It's the big cover-up," Iida told his Westminster audience. "People are being told it's quite safe to have a little [radiation] exposure."

Indeed, at a recent conferences of prefectural governors, young people in particular were urged to return to Fukushima. "If you come to live with us in Fukushima and work there, that will facilitate its post-disaster reconstruction and help you lead a meaningful life",said Fukushima Gov. Masao Uchibori.

Young people in Japan, however, appear not to be cooperating. Where evacuees are returning, the majority are senior citizens, who have less to lose from a health perspective and are more traditionally tied to the land and their ancestral burial grounds.

"They want to die where they were born and not in an unfamiliar place", said Yoshiko Aoki, an evacuee herself who now works with others, and who also spoke at the London conference.

All of this impacts revenue from the inhabitants' tax which constitutes 24.3% of all local tax sources and is collected by both prefectures and municipalities. It is levied on both individuals and corporations but with the bulk of revenue coming from individuals.

Senior citizens who have retired do not contribute to income tax, so the onus is on governors and mayors to lure as many working people as possible back to their towns and regions in order to effectively finance local public services.

Late last year, the Asahi Shimbun looked at tax revenues in the 42 municipalities affected by the triple 2011 disasters of earthquake, tsunami and the Fukushima meltdowns.

Unsurprisingly, the areas hardest hit by radiological contamination had suffered the biggest economic blows. Those areas free from radioactive fallout could simply rebuild after the tsunami and earthquake, and had consequently recovered economically, some even to better than pre-3/11 levels.

"On the other end of the scale, Namie, Fukushima Prefecture, marked the biggest decreasing rate - 72.9 percent - in tax revenues for fiscal 2014", the Asahi Shimbunreported. "All residents of the town near the crippled nuclear plant remain in evacuation. Although tax payments from companies increased from decontamination work and other public works projects, income taxes paid by residents and fixed asset taxes have declined."

To return or not to return is the question of the hour - or it will be come March 2017, when the Abe government has announced it will revoke many evacuation orders. At that point, government compensation to evacuees would be lifted, putting them under financial pressure to return. Cue more confusion.

People are confronted, said Iida, with "two extreme views, either that it's very dangerous or quite safe. So it's very difficult to decide which is the truth and it has been left up to individuals."

One of those towns that could be declared 'safe' is Tomioka, Japan's Pripyat, formerly home to close to 16,000 people but now uninhabited.

"It's like a human experiment, that's how we feel," said Aoki in London, herself a former Tomioka resident. "The Governor of Fukushima spoke about a safe Fukushima. We want it to become safe, but our thoughts and reality are not one and the same."

Observes Kyoto University professor of nuclear physics, Koide Hiroaki, in the Vice film, who has been outspoken for decades against the continued use of nuclear energy:

"Once you enter a radiation controlled area, you aren't supposed to drink water, let alone eat anything. The idea that somebody", he pauses, " ... is living in a place like that is unimaginable."