Posted by davebishop on Tuesday, 01 March 2016 in Climate Change 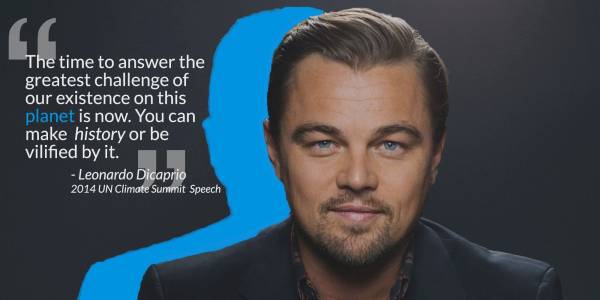 Leonardo DiCaprio used his Oscar acceptance speech last night to declare that climate change “is real” and to blast what he called the “politics of greed.”DiCaprio won the Academy Award for best actor for his role in “The Revenant” as a 19th-century frontiersman who is left for dead after being mauled by a bear.He said making “The Revenant” was “about man’s relationship with the natural world” and noted that the world in 2015 marked its hottest year on record. The production crew, he said, had to move to the “southern tip of this planet” in order to find snow.“Climate change is real; it is happening right now. It is the most urgent threat facing our entire species, and we need to work collectively together and stop procrastinating,” DiCaprio said, to applause from celebrities and others inside Hollywood’s Dolby Theatre.“Let us not take this planet for granted,” he said.As he did months earlier in Davos, Switzerland, earlier this year, DiCaprio also decried “the politics of greed.” He called on viewers to support leaders “who do not speak for the big polluters or the big corporations, but who speak for humanity.”Speaking to reporters after the Academy Awards ceremony, DiCaprio said he had hoped he’d be able to bring his message about climate urgency to the millions of people watching the Oscars. He also directly addressed the upcoming 2016 presidential elections.“I feel so overwhelmed with gratitude, but I also feel the ticking clock,” he said. “The truth is this: If you do not believe in climate change, you do not believe in modern science or empirical truths.”A longtime environmental activist, DiCaprio has been deeply involved in the climate movement. Last year, he attended a U.N. summit in Paris to lend support to an international accord.DiCaprio also has bought the movie rights to a post-apocalyptic young adult novel, “The Sandcastle Empire,” which reportedly attracted the actor with its environmental themes (ClimateWire, Feb. 26).He said last night that he also is working on a documentary about climate change that has brought him to Greenland, China, India and elsewhere.“This is the most existential crisis our civilization has ever known, and I wanted to speak out about that,” he said.