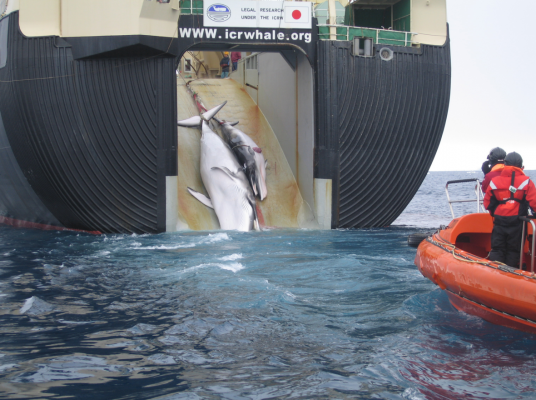 Japan’s actions are in defiance of international criticism and despite a 2014 UN legal decision that ruled so-called scientific whaling activity in the Southern Ocean was a front for commercial hunts.

The Australian government has described Japan’s decision to resume whaling over the southern hemisphere summer as “deeply disappointing” and says it has raised concerns at the highest level of the Japanese government.

It had said it would consider sending a customs patrol vessel to the Southern Ocean as well as exploring options for legal action.

But conservation group Sea Shepherd said in February that the Japanese fleet had faced little or no scrutiny over the summer and Australia and New Zealand seemed unwilling to send a ship to intercept them.

So what are we to do? Are you opposed to killing whales? If so we want to hear from you. This email address is being protected from spambots. You need JavaScript enabled to view it.

CommenJapan has confirmed whales were killed on its most recent “scientific” expedition in the Antarctic regFour survey ships from Japan’s Institute of Cetacean Research were in the Antarctic region over a period of 115 days from 1 December last year.