Posted by clark on Friday, 25 March 2016 in Earth Violators 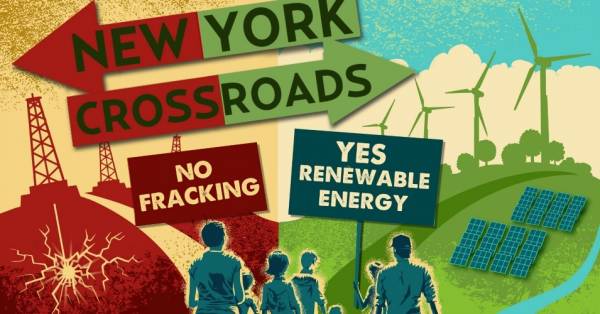 On the Holleran maple farm in Pennsylvania, workers clear the way for the proposed Constitution Pipeline. Some felled trees have been spray-painted with the American flag.

It’s also pushing for thousands of miles of new proposed fracked-gas pipelines to service them, like the NED pipeline through New England, the Millennium Pipeline expansion in Pennsylvania, the Tennessee pipeline in West Virginia, and related infrastructure including the gas storage facility at Seneca Lake, New York.

The push is happening because the fracking boom, much like the wildcatting days of old, was unplanned and reckless. It over-produced, then went bust. Gas supply exceeded demand, so prices and production tanked. That made gas companies desperate to get their supply glut shipped to new markets. Hence the need for new pipelines to transport it, new compressor stations to push it along, and LNG terminals to export it, which would mean new demand, and new fracking boom.

So, new pipeline proposals are everywhere, and fracking and pipeline companies are using the Federal Energy Regulatory Commission and eminent domain to strong-arm residents and condemn private property in their way. If you’ve seen “There Will Be Blood,” you get the picture.

In Pennsylvania, land taking and pre-emptive, hostile tree-cutting has already happened along the route of the proposed Constitution Pipeline, even though it hasn’t been approved and faces considerable citizen opposition in New York. The 124-mile project has been proposed to transport fracked gas from Pennsylvania’s Marcellus Shale through New York state to a compressor station outside of Albany, which connects to other pipelines servicing New York and New England, and if the industry gets its way, to export facilities.

The pipeline companies, Cabot Oil & Gas and Williams, also wanted to fell a whopping 700,000 trees in New York to prepare for construction, but New York residents fought and delayed tree-cutting and construction at least until 2017. That forced the companies to admit they can’t move forward on the pipeline without permits New York state has yet to grant.

The admission comes late for Pennsylvania residents. In recent weeks chainsaw crews needlessly cut down thousands of trees in the pipeline’s path, including stands of sugar maples that were the livelihood of a family farm. Property owners and activists who objected were charged with contempt, hauled into federal court and warned by the judge not to interfere – all for a project that hasn’t been approved in New York and may never get built.

Serious questions about the Constitution Pipeline’s impact on New York’s water quality and other issues are under review at New York’s Department of Environmental Conservation. The DEC and other state agencies have the power and reserve the right to say “no.”

New York has so far withheld needed permits for the pipeline, but that hasn’t stopped FERC from using eminent domain to take Pennsylvania residents’ land in the pipeline’s path, and authorizing pipeline crews to cut down 100,000 of their trees. It’s as if they’re saying, the fix is in: State permits are just a rubber stamp anyway, so why bother waiting for them to be granted?

Megan Holleran on her farm in New Milford, Pennsylvania.

The Holleran family, owners of a maple syrup farm in New Milford, Pennsylvania, set up a blockade to stop the pipeline crews from destroying their sugar maples. They were joined by scores of activists, and for weeks they kept watch over their trees, occupied their own land and asked tree-cutting crews to leave. On Feb. 19, they had to answer charges of contempt in federal court for it. The judge dismissed the charges, but he granted the police and U.S. marshals permission to arrest anyone trying to stop the workers from cutting down trees. On March 1, crews guarded by heavily-armed marshals took down the Holleran’s trees.

That could become standard procedure across the country. The Hollerans fought for their home, livelihoods and rights, and they lost. But they and those standing with them are also fighting for the planet.

The Paris climate agreement set ambitious goals for limiting global warming to 2 degrees Celsius or lower, and fed the perception that natural gas is a ‘bridge fuel’ that would lower emissions while transitioning to low-carbon energy. But natural gas is no bridge; it takes us over a cliff. If the Constitution Pipeline and the rest of the pending fracking infrastructure projects get built, they will lock us into 40 more years of high-GHG fossil fuel use, and shatter any chance of limiting global warming to 2 degrees Celsius.

We’ve got alternatives, and communities must deploy them before it’s too late. Places like the Hollerans’ farm are the front lines of that fight. That’s why I’ve made a new film, “How To Let Go of the World (and Love All the Things Climate Can’t Change),” about the power of local communities to reject exploitation by the oil and gas industry, and to pull together to determine their own climate and energy solutions. Here’s the trailer.

We’re taking it on a 100-city Let Go and Love Tour to communities across the U.S. that are fighting fossil-fuel infrastructure projects. Tour events screen the film and offer information and practical resources for communities to build clean-energy alternatives, connecting them to engineering, legal and regulatory, and finance expertise they need to make renewables a reality.

Whether you live in the path of the mad dash to build out fracked gas infrastructure – and millions of us do – or you just want a habitable planet to live on, we’re all deeply invested in how this struggle plays out. It’s a race against time: We have to bring embattled communities the resources and know-how they need to build the clean-energy future they want, before the gas companies bring the chainsaws.Editor’s Note: Josh Fox and others from the activist group Beyond Extreme Energy were arrested on Thursday during the Pancakes Not Pipelines protest in Washington, D.C. The demonstration served pancakes while protesting fossil-fuel projects such as the pipeline that cost the Holleran family their maple sugar farm.

Images courtesy of the author