Posted by Kumanu on Sunday, 21 August 2016 in Climate Change 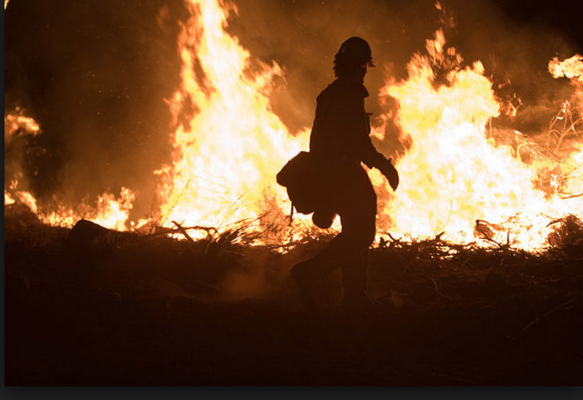 In San Bernardino County, Calif., 82,000 people were ordered to leave their homes Wednesday as an explosive wildfire “hit with an intensity that we hadn’t seen before,” as one fire official said, and surged across 30,000 acres.

It followed dramatic flooding in Louisiana that the Red Cross termed our “worst natural disaster” in this country since Hurricane Sandy four years ago. Thirteen have been killed and 40,000 homes damaged — and those numbers could get worse.

The same week as the Louisiana and California disasters, the Alaskan village of Shishmaref voted to permanently relocate as the barrier island on which it rests is threatened by rising seas.

It all seems more and more of a pattern — from worse than 1 in 1,000 year floods in South Carolina to 2015 floods in Texas and Oklahoma that scientists later said had been enhanced by global warming.

And it’s certainly not just here in the United States: In a dramatic wildfire evacuation, more than 80,000 people fled Fort McMurray, Canada, in April, terrorized by an early-season northern wildfire that grew to more than 1 million acres in size.

So is this what climate change looks like — more and more people displaced?

“You’d find no scientist would disagree with the fact that a changing climate is and will continue to put people out of their homes,” said Greg Holland, a hurricane and climate expert at the National Center for Atmospheric Research. Holland said that far and away the most obvious reason for this is rising seas swallowing coastal zones, as in the case of Shishmaref. “As far as sea level rise is concerned, there’s zero doubt about it,” he said.

As for weather extremes related to such factors as rain and heat, Holland continued, “the consensus documents are saying they will increase in number and intensity, and are already increasing in number and intensity, and so there will be areas, it’s hard to pinpoint which one, where it just may be not worth your while to remain there, because things get hit so often.”

As is repeated ad nauseam, attributing any individual disaster to climate change remains tricky, especially in real time. Floods happen regularly in even a normal climate, and fires can start from human carelessness or even arson. Moreover, their damage is made worse by people living ever closer to what is called the “wildland urban interface,” which puts them in the way of fires. Climate change didn’t cause sprawl.

While such climatic factors as heat, drought and earlier seasonal snowmelt surely exacerbate matters (for fires), it’s hard to say that they pulled the trigger. Still, in a year in which every single month so far has set a new global temperature record, experts seem more willing than ever to get past the “climate change didn’t cause this” qualifier and talk about the trends that we’re now seeing.

“Displacement from fires and floods is not a new phenomenon,” said Alex de Sherbinin, a geographer at Columbia University’s Earth Institute who focuses on the human implications of a changing planet. “However, the question is whether the frequency, spatial area, intensity and duration of such events is increasing under climate change.”

“Evidence suggests that they are indeed increasing along many of these dimensions, and that the number of people displaced by these events is growing in parallel,” de Sherbinin continued. “There are ongoing efforts to attribute specific events to climate change — and that work needs to continue — but climate researchers have documented that the risk of such events would be expected to increase under a changing climate.”

And of course, the biggest threat is across the world and especially in developing countries that can’t bounce back from disasters in the way that the United States can.

“Future climate change projections indicate that previously unprecedented extreme weather events may become the norm rather than the exception and it is widely agreed that such events — in combination with other drivers of population exposure and vulnerability — will amplify the risk and challenges of displacement over the 21st century,” notes a recent report from the office of the United Nations’s high commissioner for refugees. It said that an average of 22.5 million people per year in recent years have been displaced by “sudden-onset, weather-related hazards,” 95 percent of them in developing countries.

Indeed, when it comes to the Louisiana floods, one climate researcher, Kevin Trenberth of the National Center for Atmospheric Research in Boulder, Colo., opined by email that it was “pathetic” that reports he’d seen on the event weren’t mentioning climate change.

According to Trenberth, for every degree Celsius of warming, the atmosphere is capable of holding 7 percent more water vapor. No wonder, then, that more intense heavy rain (and snow) events have been long predicted as the world warms, and indeed, a trend toward more precipitation in the most extreme events has already been documented in the United States, according to the U.S. National Climate Assessment.

“The fact that Louisiana had a flood, I really would never attribute to global warming,” Holland said. But it’s the magnitude of this particular flood that stands out, he continued.

“The 1,000-year return period in the area is 20.7 inches,” he said. “They had over 30 inches. So I would say that with Louisiana, the actual intensity almost certainly had a contribution with global warming.”

The United States has, admittedly, seen even worse disaster events than this year: Hurricane Sandy in 2012 displaced 775,000 people, according to the International Displacement Monitoring Center.

But there’s a case to be made that there is a role for climate change in this, too: Seas, after all, were higher when Sandy arrived than they would have been for the same storm in 1912, meaning that at least some of the resultant flooding and displacement might have been avoided.

As Holland’s comments suggest, rising seas are clearly and directly caused by a warming planet, and they don’t come and go like weather events. They just keep coming, and when they swallow up land, it doesn’t come back again.

No wonder then that the issue of climate change displacement has so far tended to focus on low-lying coastal areas or islands, where it has arguably already become unsustainable to site some communities. The United States hasannounced recently that it will spend millions of dollars to relocate members of the Biloxi-Chitimacha-Choctaw tribe, who live on the Isle de Jean Charles amid Louisiana’s vanishing coastal wetlands. That disappearance, in turn, is driven by land subsidence and the cutting up of the wetlands by industry, but also, again, rising seas.

In coastal Alaska, meanwhile, it isn’t just Shishmaref — the tiny Arctic village ofKivalina, too, is wrestling with whether it will have to move. It also lies on a barrier island that is facing more severe coastal inundation in storms as sea ice retreats.

Around the world, climate relocations are also underway or already completed. Fiji, for instance, has relocated a village called Vunidogolo to higher ground.

Yet the topic of how climate change can displace people tends to be more widely discussed outside of the United States than within it, which means that we are behind on the conversation.

“This is merely a foretaste of what will happen in the decades to come on a much more massive scale,” said Michael Gerrard, who directs the Sabin Center for Climate Change Law at Columbia University. “Few places have undertaken serious planning that ultimately there’s going to have to be, and I’m talking about decades, large-scale movement inland in many coastal areas.”

“These events are overwhelming our governmental capacity to respond, which is then causing people to be displaced,” added Robin Bronen, a human rights lawyer who focuses on climate displacement in Alaska at the Alaska Institute for Justice. “And it’s not only our governmental capacity, but it’s also the ways that we’ve lived, where we have built our communities in places based on one relatively stable climate, that we think we’ve understood, and then have the capacity and technology to adapt to.”

One group taking the link between climate and disasters seriously is the insurance industry, as well as the reinsurance industry. Both, not surprisingly, have a reason to look at aggregate shifts in risks, and how those in turn produce trends in insured losses.

A recent report by the mutual insurance company FM Global, for instance, drew on Trenberth, Kerry Emanuel of the Massachusetts Institute of Technology and other climate researchers to assess changing disaster risks related to increased rainfall in the United States.

So no: No disaster, and no resultant displacement, is “caused” by climate change. On the other hand, when you look at the big picture, there are clear reasons to worry.

“You can’t attribute specific events to climate change, but this is the kind of thing that will happen with greater probability,” Gerrard said. “That’s the standard line, and is accurate.”