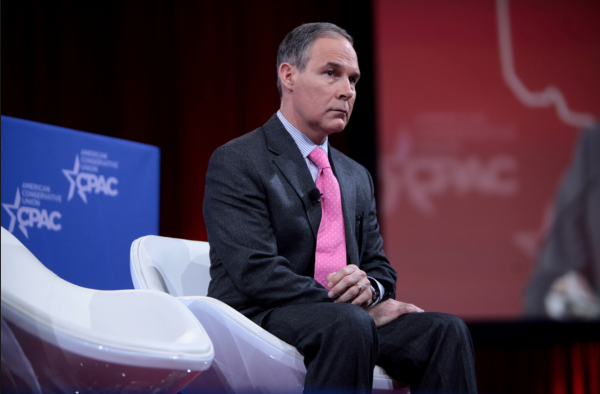 President-elect Donald Trump has made no secret of his hostility toward the Environmental Protection Agency. He has repeatedly called for its elimination, telling Fox News in 2015 that the environment would be just “fine” without it.

Activists say Trump has followed through on those threats in nominating Scott Pruitt to lead the EPA, a man who has sued the agency 13 times as Oklahoma’s attorney general. Pruitt, a climate change denier with close ties to the fossil fuel industry, has a long record of attacking the EPA and undermining environmental regulations. On his LinkedIn page, Pruitt refers to himself as a “leading advocate against the EPA’s activist agenda.”

“During the campaign, Mr. Trump regularly threatened to dismantle the EPA and roll back many of the gains made to reduce Americans’ exposures to industrial pollution, and with Pruitt, the president-elect would make good on those threats,” said Ken Cook, head of the Environmental Working Group, a Washington research and advocacy organization. “It’s a safe assumption that Pruitt could be the most hostile EPA administrator toward clean air and safe drinking water in history.”

The EPA’s mission is to protect human health and the environment by issuing regulations and enforcing the nation’s environmental laws. Under President Barack Obama, the EPA created the Clean Power Plan, which aims to cut carbon pollution from power plants. It also issued new guidance for the Clean Water Act to protect thousands of waterways and wetlands, and introduced measures to limit emissions from heavy-duty trucks and reduce smog and mercury emissions from industrial sources.

Last November, EPA chief Gina McCarthy said she was confident a Trump administration would not be able to derail the agency’s progress over the last eight years. “EPA has done its job well,” she said.

Experts, however, say they’re not so sure. A number of EPA regulations could be rolled back or simply not enforced. Even more complicated rules like the Clean Power Plan could be severely undermined. Pruitt, activists stress, would prioritize cooperation with industry over regulatory rigor.

It’s this simple: If senators take seriously their job of protecting the public, they must vote no on Pruitt.

Ken Kimmell, president of the Union of Concerned Scientists

“The EPA plays an absolutely vital role in enforcing long-standing policies that protect the health and safety of Americans, based on the best available science,” Ken Kimmell, president of the Union of Concerned Scientists, said in a statement last month. “Pruitt has a clear record of hostility to the EPA’s mission, and he is a completely inappropriate choice to lead it.”

The EPA is not a perfect agency ― the water crisis in Flint, Michigan, highlighted that ― but it does do a lot of important work with national and global ramifications.

“Scott Pruitt has a record of attacking the environmental protections that EPA is charged with enforcing. He has built his political career by trying to undermine EPA’s mission of environmental protection,” Fred Krupp, president of the Environmental Defense Fund, said in a statement last month. “Our country needs — and deserves — an EPA administrator who is guided by science, who respects America’s environmental laws, and who values protecting the health and safety of all Americans ahead of the lobbying agenda of special interests.”

With Pruitt’s confirmation hearing scheduled for Wednesday, several activist groups have called on the Senate to refuse his appointment.

“It’s this simple: If senators take seriously their job of protecting the public, they must vote no on Pruitt,” Kimmell said.