Posted by plantitfilm on Friday, 20 January 2017 in Earth Violators 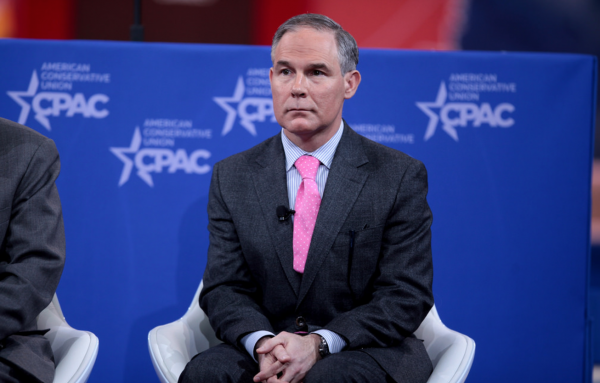 If there's one thing we know for sure our new president and the people he appointed to "make America great again" are willing to lie to get what they want and should not be trusted.

Donald Trump's choice to run the Environmental Protection Agency has admitted that climate change has not real.

Scott Pruitt contradicted both himself and Mr. Trump by admitting that the world is actually getting warmer and that suggestions of such were not a scam perpetuated by the Chinese.

Asked by Democrats during his Senate confirmation hearing, the Oklahoma attorney general admitted that he didn't think climate change was a lie that was being used to harm the economic competitiveness of the US.

"I do not believe climate change is a hoax," Mr. Pruitt said.

That contradicts claims made repeatedly by Mr Trump, who has suggested that he doesn't believe that global warming exists at all.relationships with oil and gas industry executives who have donated to his political campaigns.

As the hearing got underway, shouting could be heard from people who were not allowed in. The room accommodated fewer than 100 people; most seats were taken by congressional staff, reporters and others who were allowed in early. Only a few seats remained for the public.

One woman was quickly wrestled out of the room by three police officers as she pulled out a roll of yellow crime scene tape and shouted "We don't want EPA gutted!"

Later, a group of coal miners wearing hard hats were allowed in to show support for Mr Pruitt. Trump has pledged to bring back tens of thousands of lost coal mining jobs once inaugurated, though he has not yet detailed how. The president-elect has also said he will "renegotiate" the international accord to reduce carbon emissions signed in Paris at the end of 2015.

Senate Republicans uniformly praised Mr Pruitt what they described as his robust record of enforcing environmental laws "when appropriate." Court records show scant evidence of Mr Pruitt acting to protect the environment in years as a state regulator.

Shortly after Mr Pruitt took office in Oklahoma in 2011, he disbanded the unit responsible for protecting the state's natural resources. He reassigned his staff to file more than a dozen lawsuits challenging EPA regulations.

Senate Democrats focused on Mr Pruitt's record of siding with polluters in court as he collected campaign contributions from them.

Sen. Sheldon Whitehouse pressed Mr Pruitt on money he raised from energy companies such as Exxon Mobil and Devon Energy, as well as the corporate "dark money" raised by groups with which he is involved that are not required to disclose their donors.

Earlier this month, Pruitt resigned from the board of the Rule of Law Defense Fund, a Washington-based group supporting the legal agendas of GOP attorney generals that Whitehouse described as "a complete black hole into which at least $1 million goes." In his response, Pruitt declined to provide details about whether the group's donors included fossil fuel companies or utilities with regulatory issues before EPA.

Though Pruitt ran unopposed for a second term in 2014, public campaign finance reports show he raised more than $700,000, much of it from people in the energy and utility industries.

Pruitt has also faced criticism from environmentalists for failing to take any action to help curb a dramatic spike in earthquake activity in Oklahoma that scientists have linked to the underground disposal of oil and gas wastewater.

Pruitt said his support for legal positions advocated by oil and gas companies was in the best interest of Oklahoma, which is economically dependent on the fossil fuel industry.