Posted by CSea on Tuesday, 04 April 2017 in Ocean/Seas/Coastlines 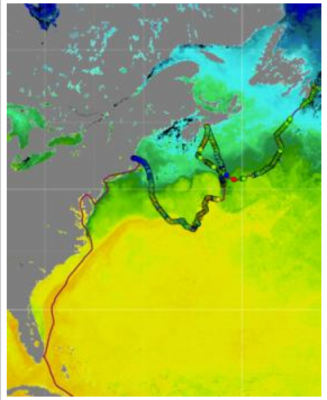 Aerosols are collections of fine particles, either biological or of other types, in suspension in a gaseous medium. They play a major role in cloud formation and therefore have a strong impact on climate models. They are however extremely hard to study due to the small size and immense variety of their constituent particles. But researchers from the University of Geneva (UNIGE), Switzerland, members of the PlanetSolar Deepwater expedition, have now succeeded in linking the composition of marine biological aerosols - and therefore their influence on the climate - to that of bodies of water under them within the Atlantic Ocean, thereby paving the way to an indirect study of these aerosols through water analysis. This study, which has been published in Scientific Reports, will contribute to making climate models more accurate.

Aerosols are fine particles in suspension in the air. Over the oceans, some contain organic or biological ingredients (bacteria, degradation products of microscopic algae) which come from sea spray, others are transported in the air (mineral dust, smoke). They serve as seeds for forming clouds and also reflect light. Their role is extremely important for modelling clouds, and therefore for the climate in general. But due to the small size of the particles and their large quantity, it’s difficult to accurately study them. So researchers at the University of Geneva (UNIGE) asked themselves if it would be possible to characterize biological aerosols through the composition of the water whence they come.

“To answer this question, we needed two tools,” explains Jérôme Kasparian, Professor in the Department of Applied Physics at the UNIGE Science Faculty. “The first is a detector of fluorescence which we designed, called Biobox, and which enables us to analyse aerosol particles one by one. The spectrum gives us information on their composition and distinguishes the organic particles, which are fluorescent, from the other particles. Then we needed PlanetSolar.” Indeed this research could only be undertaken over a long time period of time without any disturbances of water and air. Only PlanetSolar, a solar boat that navigated remains at sea for three months and produces no emissions, could make it possible.

Read more at University of Geneva