Posted by michaelb on Monday, 08 May 2017 in Lakes/Rivers/Wetlands 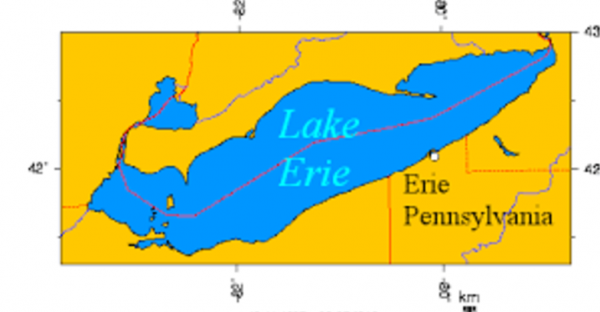 Few people know Lake Erie as well as Jeffery Reutter, the recently retired director of the Ohio Sea Grant and Stone Laboratory on the lake.

He’s shown me a picture of his hand covered with toxic algae when he was a graduate student in 1971 — and that same hand covered again nearly half a century later, in 2014, the year cyanobacteria from toxic algae blooms made the water in Toledo and part of Michigan’s Monroe County unsafe to drink.

A few weeks ago, at a “Farmers Together” forum on saving Lake Erie, I asked him what would happen if President Trump’s budget ending all funds for the Great Lakes Restoration Initiative and slashing funds for the EPA becomes reality.

The scientist, who is anything but an alarmist, responded instantly. “We can no longer count on Lake Erie producing safe drinking water for the 11 million people it now serves.”

That’s the bottom line. Erie, the warmest, shallowest and second-smallest of all the Great Lakes is indeed in danger.

The forum I moderated in Tontogany, Ohio, was aimed at getting farmers to take action to reduce the amount of phosphorus pouring into the lake, both from fertilizer and from massive amounts of manure produced by huge factory farms.

Whether that would be enough to reduce toxic algae blooms is debatable, and whether this can be done voluntarily is doubtful. Meindert VanDenHengel , the owner of a huge hog CAFO, or Concentrated Animal Feeding Operation, told me the problem wasn’t so much so-called “factory farms” like his.

“They regulate CAFOs, farms that have at least 2,500 animals. But you have one hog fewer, and they don’t,” he said.

Whether that’s the case or not, the lake does seem to be in danger, with few signs the crisis will get better soon. This is not, of course, the first time Lake Erie’s been in trouble.

Back in the 1970s, there were similar algae blooms, other pollution, and some commentators actually pronounced the lake dead. But people got serious about cleaning it up — and the sparkling waters of Lake Erie came back.

Can the lake be saved again? “Well, this will be much harder,” Reutter said. “Before, the problems were largely caused by improper disposal of (human) sewage.”

Wastewater treatment plants were built and modernized, and raw sewage stopped pouring into the lake. But eliminating the effects of vast amounts of fertilizer already poured into the earth and water will, in a best-case scenario, take far longer.

If there is a hopeful sign, it is that more and more people seem to be worrying about the lake. Markie Miller, a Michigan native and a graduate student in environmental studies at the University of Idaho, regularly drives to Toledo to try to get signatures to ask city council to enact a Lake Erie Bill of Rights.

Her group, Toledoans for Safe Water, wants to “prevent and end legalized harm” by giving the lake “personhood” status in law, and giving the city the power to say no to any corporate projects that could damage Lake Erie.

That may be an admirable goal — but Toledo controls only a very small chunk of the Lake Erie shoreline. In all, four states and Ontario, Canada’s biggest province, all border the lake. Their governments all have different ideas about the lake. Michigan, for example, has officially filed a declaration with the EPA that all of Lake Erie is environmentally “impaired.”

But Ohio Gov. John Kasich is refusing to do the same. Frustrated, a coalition of environmental, conservation and business groups have filed a lawsuit April 25 in federal court asking that the Environmental Protection Agency reject Ohio’s decision not to designate the lake as impaired.

What may be needed, however, is something much stronger. Possibly our best chance at saving Lake Erie, and perhaps the other Great Lakes, is a formal treaty between the United States and Canada committing both countries to strong measures that would stave off environmental disaster.

That may not be a politically popular idea these days.