Posted by Wolf on Tuesday, 05 June 2012 in Climate Change

Even as insect infestations and other factors accompanying warming have led to the “browning” of some stretches of boreal forest between temperate regions and the Arctic tundra, the tundra appears to be greening in a big way, various studies have shown. The newest such work, focused on scrubby windswept regions along Russia’s northwest Arctic coast, has found a particularly noteworthy shift is under way. 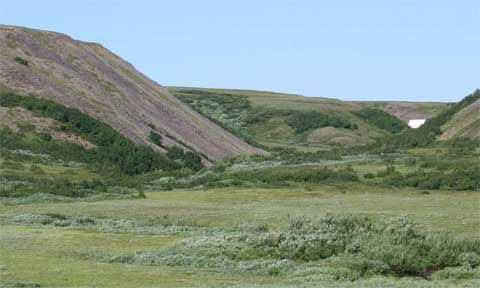 In this part of the Arctic, which could be a bellwether for changes to come elsewhere with greenhouse-driven warming, what might be called pop-up forests are forming. Low tundra shrubs, many of which are willow and alder species, have rapidly grown into small trees over the last 50 years, according to the study, led by scientists from the Biodiversity Institute at the University of Oxford and the Arctic Center of the University of Lapland. The researchers foresee a substantial additional local warming influence from this change in landscapes, with the darker foliage absorbing sunlight that would otherwise be reflected back to space. But the fast-motion shift to forests will likely absorb carbon dioxide, as well.

A particularly interesting aspect of this work, to my eye, is how it reveals the potential for fast-motion responses of ecosystems to environmental change in the far north. In work I covered in 2007, botanists found that Arctic plant species were extremely responsive to fairly rapid climate shifts in the past.

The new study, published Sunday in Nature Climate Change, is significant in two ways. It challenges a longstanding model of the Arctic ecological response to global warming. The old notion was that forests in boreal regions ringing the treeless tundra would slowly advance north.