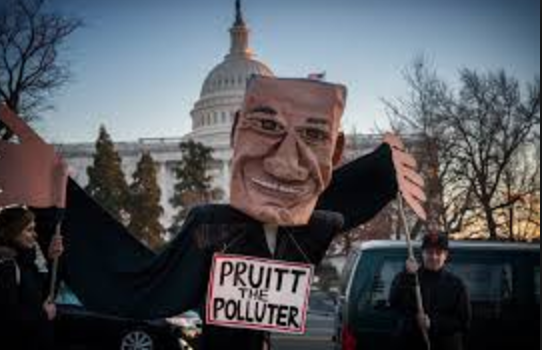 States are threatening to sue the Environmental Protection Agency (EPA) to try to force the Trump administration into writing new environmental policies.

The potential lawsuits from states like Maryland and Connecticut could put the Trump administration and EPA head Scott Pruitt in a tough spot, where they may have to take new enforcement actions or take new actions that could have a negative impact on fossil fuel plants.

Both of those states have filed formal notices with the EPA that they intend to sue the agency for not responding to petitions they filed asking the EPA to force power plants in upwind states to curb their air pollution.

“The agency has an obligation to act,” said Richard Revesz, director of New York University School of Law’s Institute for Policy Integrity, a regulatory think tank.

Maryland, led by Republican Gov. Larry Hogan, told the EPA last week that air pollution from plants in states like Pennsylvania and Ohio is blowing across borders, polluting their states and making it difficult to meet air quality standards. The EPA declined to comment on the notice.

Connecticut made a similar plea earlier this year in its own notice of intent to sue. New York, meanwhile, led a coalition of more than a dozen states arguing that the agency is obligated under the Clean Air Act to write methane pollution standards for all of the nation’s existing oil and natural gas wells.

The petitions and lawsuit threats contrast with states’ efforts to use court action to stop the Trump administration from rolling back environmental regulations.

Experts said that in those cases, in which agencies have wide discretion in formulating policies, the states are less likely to be successful. But when the law sets clear, nondiscretionary duties, such as responding to petitions, the states likely have more of a leg to stand on.

Nonetheless, states — mostly Democratic ones — have been aggressive in their fights to preserve former President Obama’s environmental actions.

The states threatening to sue say their petitions should strike a chord with Pruitt. He has repeatedly expressed a desire to improve air quality and reduce concentrations of pollutants that are dangerous to breathe.

Pruitt also stresses the importance of “cooperative federalism,” which he says means that the EPA ought to trust the states more on environmental matters, but also enforce the law, especially in areas like cross-state pollution.

“The science of interstate air pollution is clear. Maryland knows, based on the data from the coal-fired power plants and the EPA itself, that more can be done to ensure downwind states like ours attain the ozone standard,” said Ben Grumbles, secretary of Maryland’s department of environment and a former senior official at EPA under President George W. Bush.

“This is a great opportunity for cooperative federalism,” he said.

Grumbles said he has not heard from the EPA regarding his petition. It was first filed late last year, but Maryland only filed the lawsuit notice last week, when the EPA’s time clock ran out.