Posted by ep-admin on Tuesday, 06 December 2011 in Buy Local

The Inefficiency of Local Food

Two members of Congress earlier this month introduced legislation advancing a food reform movement promising to help resolve the great environmental and nutritional problems of the early 21st century. The intent is to remake the agricultural landscape to look more like it did decades ago. But unless the most basic laws of economics cease to hold, the smallholder farming future envisioned by the local farming movement could jeopardize natural habitat and climate change mitigation efforts, while also endangering a tenuous and temporary victory in the battle against human hunger. 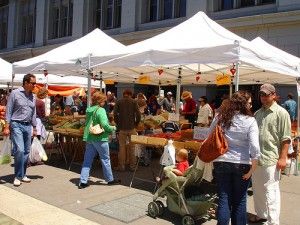 The “Local Farms, Food and Jobs Act” sponsored by Senator Sherrod Brown of Ohio and Representative Chellie Pingree of Maine, throws about $200 million to local farm programs. That’s a rounding error in the $3.7 trillion federal budget. But the bill follows on a federal rule that gives preference to local farms in contract bidding for school lunches. It also builds on high-profile advocacy by Michelle Obama, who has become a leader of the food reform movement, joining the likes of Michael Pollan, the author of The Omnivore’s Dilemma, and famed-chef Alice Waters. The bill’s introduction came as the world population hit 7 billion, a milestone that provides a stark reminder of the challenge agriculture faces to feed a world population expected to grow to 9 billion by 2050. Experts estimate that in the next 50 years, the global food system likely needs to produce as much food as it did in the previous 10,000 years combined.

Amid heightened concern about global climate change, it has become almost conventional wisdom that we must return to our agricultural roots in order to contain the carbon footprint of our food by shortening the distance it travels from farm to fork, and by reducing the quantity of carbon-intensive chemicals applied to our mono-cropped fields.

But implicit in the argument that local farming is better for the environment than industrial agriculture is an assumption that a “relocalized” food system can be just as efficient as today’s modern farming. That assumption is simply wrong. Today’s high crop yields and low costs reflect gains from specialization and trade, as well as scale and scope economies that would be forsaken under the food system that locavores endorse.