Posted by c4kadlecek on Wednesday, 27 November 2013 in Buy Local 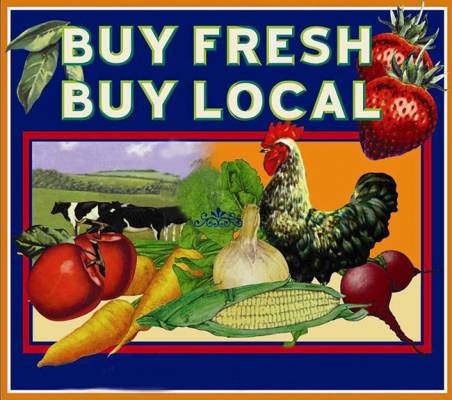 Most produce in the US is picked 4 to 7 days before being placed on supermarket shelves, and is shipped for an average of 1500 miles before being sold. And this is when taking into account only US grown products! Those distances are substantially longer when we take into consideration produce imported from Mexico, Asia, Canada, South America, and other places.

We can only afford to do this now because of the artificially low energy prices that we currently enjoy, and by externalizing the environmental costs of such a wasteful food system. We do this also to the detriment of small farmers by subsidizing large scale, agribusiness-oriented agriculture with government handouts and artificially cheap energy.

Cheap oil will not last forever though. World oil production has already peaked, according to some estimates, and while demand for energy continues to grow, supply will soon start dwindling, sending the price of energy through the roof. We'll be forced then to reevaluate our food systems and place more emphasis on energy efficient agricultural methods, like smaller-scale organic agriculture, and on local production wherever possible.

Cheap energy and agricultural subsidies facilitate a type of agriculture that is destroying and polluting our soils and water, weakening our communities, and concentrating wealth and power into a few hands. It is also threatening the security of our food systems, as demonstrated by the continued e-Coli, GMO-contamination, and other health scares that are often seen nowadays on the news.

These large-scale, agribusiness-oriented food systems are bound to fail on the long term, sunk by their own un-sustainability. But why wait until we're forced by circumstance to abandon our destructive patterns of consumption? We can start now by buying locally grown food whenever possible. By doing so you'll be helping preserve the environment, and you'll be strengthening your community by investing your food dollar close to home. Only 18 cents of every dollar, when buying at a large supermarket, go to the grower. 82 cents go to various unnecessary middlemen. Cut them out of the picture and buy your food directly from your local farmer.