Posted by Jan Richards on Wednesday, 01 August 2018 in Transportation

The Cost of Ocean Pollution for Shipping 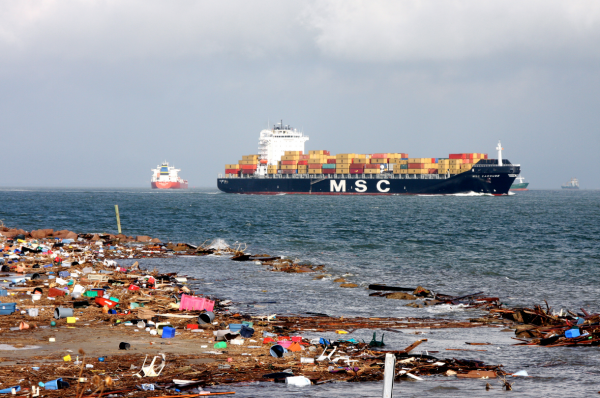 There are two areas where shippers will feel the effect of the growing water and air pollution problem: freight costs and various taxes and fees. There are now an estimated 52,000 merchant ships on the seas, and the fleet is growing fast as goods are ferried in vast quantities from Asian, American and European industrial powerhouses to consumers around the world—and average ship sizes are growing too.

According to National Oceanic and Atmospheric Agency (NOAA): “Thanks to the International Maritime Organization rules, the largest ships can each emit as much as 5,000 tons of sulphur in a year—the same as 50 million cars, each emitting an average of 100 grams of sulphur a year. With an estimated 800 million cars driving around the planet, that means 16 mega-ships can emit as much sulphur as the world’s fleet of cars.”

The industry says that the United Nations (UN) and NOAA are too conservative in their estimates. Maersk’s Robert Pedersen recently said: “The sulphur content varies according to where you get your fuel. Our average sulphur content is, I believe, 2.5%. It’s rather rare you get anything close to 4.5%.”

He added that “the sulphur issue is one for the whole industry” and that there would be a “huge cost implication” to switch to cleaner fuel. Assuming Pedersen is correct, the number of megaships needed to equal all cars would be around 32. Remember, there are over 52,000 vessels.

Indeed, the UN has taken action. The International Convention on the Prevention of Pollution from Ships, known as MARPOL 73/78, contains the new restrictions, putting strict limits on sulphur percentages into effect through 2020.

“There’s no doubt this global sulphur cap will present the shipping industry with challenges and has already begun to add significant complexity to the marine fuel supply chain,” said Bruce Abbot of Genoil, a Canadian fuel desulphurization company, on the restrictions.

A second problem for all ocean transit customers is general trash in the ocean, particularly plastics. Everyone feels the effects when poisons reduce fish stocks and ships are routing around “islands” of trash in the open oceans. Some 10 million to 20 million tons of plastic enter the oceans every year, accounting for up to 80% of the trash at sea and on shores.

Oceanic plastic comes from “littering, poorly managed landfills, tourist activities, and fisheries,” the UN Environment Program said in a recent statement. “Some sinks to the bottom, but much remains as flotsam, traveling vast distances and accumulating in massive midocean gyres,” such as the Great Pacific Garbage Patch.

There is now a “Western Patch” and an “Eastern Patch” that’s hindering shipping lanes in those regions causing extended routing. According to NOAA, finding and cleaning up with specially outfitted vessels will be very expensive. If a ship traveled at 11 knots (20 km/hour) and worked during daylight hours (approximately 10 hours a day), it would take 67 ships one year to cover just one such ocean patch.

At a cost of $5,000 to $20,000 per day, it would cost between $122 million and $489 million for one year. That’s a lot of money—and that’s only for boat time. Those figures don’t include equipment, disposal or labor costs—and keep in mind that not all debris items can be scooped up with a net.

Doug Woodring, founder of the Ocean Recovery Alliance that runs the Plastic Disclosure Project, said that a recent $13 billion estimate is conservative. Woodring added that California, Oregon and Washington alone spend an estimated $500 million a year removing waste from the Pacific coastline.

It’s clear that carriers will be paying for mitigating this mess through operating costs and fuel premiums as well as government and industry expenditures. Shippers need be aware of and plan to pay for actions by these groups to recover costs.

Peter Moore Peter Moore is Adjunct Professor of Supply Chain at Georgia College EMBA Program, Program Faculty at the Center for Executive Education at the University of Tennessee, and Adjunct Professor at the University of South Carolina Beaufort. Peter writes from his home in Hilton Head Island, S.C., and can be reached at  This email address is being protected from spambots. You need JavaScript enabled to view it. .
Tagged in: ocean and climate ocean conservation ocean plastic plastic pollution shipping shipping food