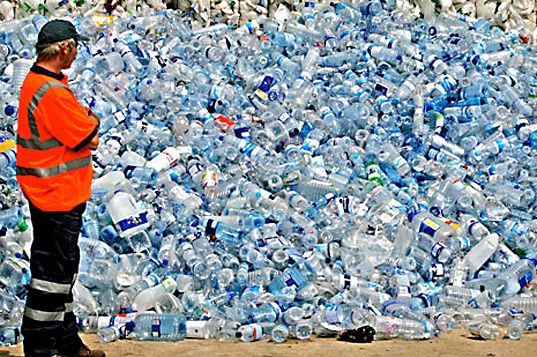 Worried by an eco backlash, the bottled water industry is waging a PR battle to turn the public back onto plastic bottled water

Bottled water is the totemic bête noire of the environmental world, a multibillion-dollar industry that takes what in the west is clean and readily available from the tap, packages it up in non-biodegradable plastic and sells it back to consumers at hugely inflated prices.
And yet sales continue to rise. In 2010, more than 2bn litres were consumed in the UK – 33 litres per person, a figure projected to rise to 40 litres by 2020. More than 40bn litres were sold last year in the US, in plastic bottles it took 17m barrels of oil to manufacture; the industry there is worth $22 billion a year and sales are increasing at a rate of 5.4 per cent annually.

The strong growth is down to an aggressive marketing campaign by companies fighting to purify a product that – clear mountain spring water notwithstanding – has been tainted by accusations that it is unnecessary, wasteful and environmentally costly.

Pegasus’s role is to ensure the NHC’s ‘authoritative voice in the hydration debate is heard more clearly’ and consolidate the successes of its predecessor, Munro & Foster, tasked in 2009 with preventing bottled water from being compared to tap water.

The NHC was formed in 2008 to prevent declining sales: 2,240m litres of bottled water were drunk in 2006, 2,125m in 2007 and 2,005m in 2008. Price, negative blind tastings (consumers prefer tap or perceive no difference) and campaigns such as those run by London’s Evening Standard, to encourage people to ask for tap water in restaurants, all played their part.

The upward trajectory coincided with a change in tack from the NHC: rather than battling the tap, its purported target has become the soft-drinks market, on a mission to protect health and encourage hydration. Every bottle of water drunk is actually a sugary liquid avoided, runs the argument.

This move not only allows the industry to occupy the moral high ground in health terms, but also to lay claim to being the greener option – quite a coup considering the 3m plastic water bottles that go to landfill in the UK alone every day.

In the US, the International Bottled Water Association (IBWA) trade association routinely points out – as it did in 2008 when Toronto City Council chose to prevent plastic bottles from being sold on municipal premises – that ‘less healthy beverages [are] packaged in a denser grade of plastic at twice the volume of bottled water’.

The IBWA is also attempting to make the issue a constitutional one through its consumer arm, Bottled Water Matters, a ‘pro-bottle’ internet campaign aimed at encouraging Americans to stand up for their right to bottled water.

According to its video: ‘There are people who want to take your choice away, people who want bottled water off store shelves because they think it’s unnecessary, but you know that’s not true.’

Tapping into the lexicon of activism, it exhorts concerned citizens to ‘let your legislators know they must not support policies that will limit or restrict [the availability of bottled water]. Your opinion... can make change happen; can influence elected officials in your state and in Washington DC.’