Posted by Aaron on Thursday, 15 March 2012 in Ocean/Seas/Coastlines 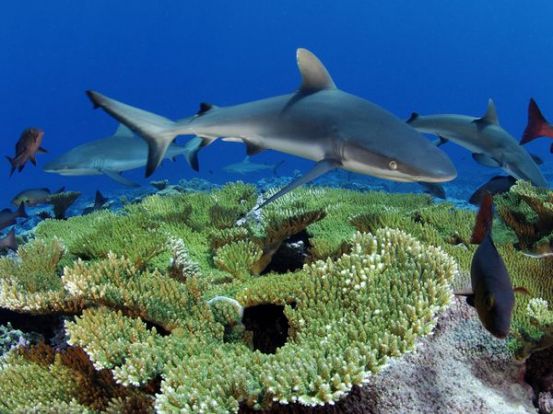 Special conservation zones known as marine protected areas provide many direct benefits to fisheries and coral reefs. However, such zones appear to offer limited help to corals in their battle against global warming, according to a new study.

The new study, published online recently in the journal Global Change Biology, was conducted by scientists from Conservation International, the University of North Carolina at Chapel Hill and the National Oceanic and Atmospheric Administration.

"Although marine protected areas could help coral populations recover from temperature-induced mortality in particular situations, this does not appear to be an effective general solution," said study author John Bruno, Ph.D., associate professor of biology in the UNC College of Arts and Sciences.

Elizabeth Selig, Ph.D., conservation scientist with Conservation International and the study's lead author, said corals living in marine protected areas can be just as susceptible to ocean warming as their unprotected neighbors.

"Marine protected areas (MPAs) can protect coral reefs from localized problems, particularly overfishing and terrestrial run-off," said Selig, who led the study as part of her dissertation in Bruno's lab at UNC. "However, the magnitude of losses from increased ocean temperatures as a result of climate change seems to be overwhelming these positive effects. This paper suggests that we need to rethink our current planning for MPAs in order to maximize the benefits they can provide."

Globally, corals reefs are being degraded by a number of factors including overfishing, sedimentation and rising ocean temperatures due to greenhouse gas emissions, Selig said.

A rise of just 1 degree to 2 degrees Fahrenheit (about 0.5 degrees to 1 degree Centigrade) above normal summertime highs can kill coral polyps, which build reefs.

Given the difficulty of slowing or reversing the rate of greenhouse gas emissions, coral reef scientists, managers and conservationists had pinned their hopes on a different, more localized strategy: saving corals by restricting fishing in marine protected areas. The reasoning is that fishing depletes herbivorous fishes, which can lead to more seaweed on the seafloor; that can harm baby corals, so restricting the taking of fish that trim back seaweed should help coral populations recover.

Previous research has shown that under optimal conditions, reefs in marine protected areas saw increases in coral cover of 1 percent or 2 percent per year.

But those gains might not be enough to mitigate the impact of thermal stress events. For example, the new study found that when water temperatures were more than 1 degree Centigrade above summertime averages for eight weeks (recognized as the threshold that generally results in widespread bleaching and significant coral death), it correlated with coral cover loss of 3.9 percent annually.

"Reducing overfishing, although clearly a very good thing, will not meaningfully limit the damage being done to the world's coral reefs by greenhouse gas emissions," Bruno added.

Richard B. Aronson, Ph.D., professor and head of the biological sciences department at the Florida Institute of Technology, said the study clearly showed that marine protected areas cannot by themselves save coral reefs.

"We have to reverse climate change by stopping runaway greenhouse gas emissions," said Aronson, who did not participate in the study. "That is a lot harder than protecting a reef against local problems like fishing pressure, because it requires international cooperation. But it can be done -- and it must be done if we are going to save the coral reefs and the rest of the planet."

Along with Selig and Bruno, the other author of the study was Kenneth S. Casey, Ph.D., a satellite oceanographer and technical director of NOAA's National Oceanographic Data Center.