Posted by bensor on Tuesday, 06 March 2012 in Environmental Heroes 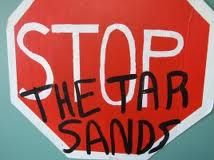 Four remarkably brave activists eluded the barricades and put their bodies between enormous Alberta tar sands upgrader parts and the ecological and climate devastation they will visit on us all.  As three of the last five of 78 ExxonMobil/Imperial Oil megaloads moved through downtown Moscow, Idaho, two protesters were arrested for linking arms and sitting down in Washington Street late Sunday night, March 4.  Police arrested two men but pulled two women to the side and detained and released them when the convoy passed.  The women did not appreciate the discrimination.

In a video by Joshua Yeidel of a KRFP Radio Free Moscow interview, We Won’t Be Accessories to Genocide: Moscow ID, March 4, 2012, one of the dismissed women explained her and her many allies’ motivations for marching, chanting, and even obstructing megaloads and risking arrest in cold and dark winter conditions.  “We’re not going to be accessories to genocide and climate change and increased cancer rates and all the other ecological damages that the tar sands intends to cause…”

Wild Idaho Rising Tide (WIRT) and community members have gathered along Moscow streets to raise their voices in protest more than forty times since July 15, 2011, when the first transports of outsourced equipment rumbled up to 425,000 pounds on Highway 95 from the Port of Lewiston to the climate-wrecking tar sands.  Despite heavy, industry-sponsored police presence and closure of entire rights-of-way, some citizens have entered the crosswalks and streets to briefly block the shipments and halt their ecological death march, before state, county, and city police officers surround, harass, and drag them away and/or arrest them.

WIRT members extend our gratitude, love, and highest esteem to the four good souls who sacrificed their freedom to stand up for what’s right last night and to all of the supportive citizens on the streets and sidewalks, who spoke out and bore witness for a greener planet, healthier humanity, and a livable, worthwhile future for everyone’s descendants.  Please join friends and activists at 9 am on Monday, March 5, at the Latah County Courthouse for the arraignments of Cass Davis and Jim Prall.  One of their spouses reported that they are doing well in jail.  Besides this brief press release compiled from WIRT activists’ input, we will send a more comprehensive, campaign-inclusive story later today.