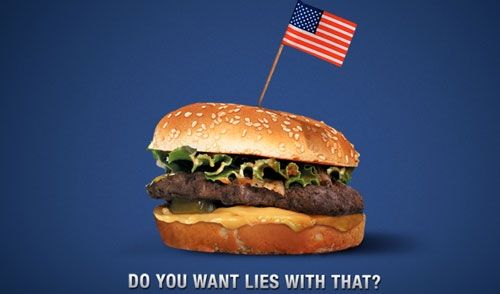 As dusk settled over the tree-lined parking lot, the first marchers wandered in. Wearing sneakers and athletic gear, they’d walked all day, and the day before that.

Many of them had started at the United Nations in New York City on Oct. 1, and they were stopping for the night at the Churchville Nature Center before making their way to the White House to campaign for labels on food that identify its status as being genetically engineered. The Right2Know march will culminate at the capitol on Oct. 16 for a rally and speeches by international figures.

Earlier in the day, the marchers stopped to rally support for their cause outside Big Bear Natural Foods on Trenton Road in Morrisville.

About 7 p.m., members of the group cheered and clapped as more arrived at the nature center. About 40 people camped on sleeping bags in the auditorium. The nature center is part of the Bucks County parks system, and is excited to host the marchers, said Diane Sears, the park’s volunteer coordinator.

The marchers’ sponsors, supporters and traveling support staff were already there, including a traveling food bus, called Everybody’s Kitchen, which normally provides food for disaster relief. A bus traveled with the group to give people who needed periodic breaks from walking.

The walk, though long, is invigorating, said Michael Bronner, a co-owner of Dr. Bronner’s Magic Soaps, an organic and fair trade body care company that started in Germany in 1858. The company helped organize the march.

“Give customers choices as long as there’s a choice to be made,” he said.

According to a Colorado State University Extension agronomy specialist’s paper, published on the extension’s website in September 2010, the U.S. Food and Drug Administration does require labeling of genetically engineered food under the following conditions:

if the food has a significantly different nutritional property;

if a new food includes an allergen that consumers would not expect to be present (e.g., a peanut protein in a soybean product);

if a food contains a toxicant beyond acceptable limits.

The FDA has since proposed voluntary guidelines for labeling food for genetically engineered ingredients, according to the paper.

Awareness of genetically engineered food and the desire for labeling has been growing.

The Center for Food Safety announced Tuesday that it has filed a legal petition with the FDA on behalf of the Just Label It campaign, signed by health, consumer, environmental, farming organizations and food companies. The campaign is pushing the FDA to require the labeling of all food produced using genetic engineering.

The Right2Know movement’s inspiration is Joseph Wilhelm of Germany, who organized two marches in Europe to protest the use of GMOs in agriculture. Thousands took part in a 736-mile march in Germany in 2007. Right2Know is the first such march in America, and Wilhelm joined in.

Taking a seat after a long day of walking, he bounced to his feet again to talk about why putting identifying labels on GMO food is important.

“It’s about choice. People don’t know what they’re eating,” said Wilhelm, founder of the organic food company Rapunzel. “GMO in food is a complex issue. There are many reasons why it is a danger to the environment, to farmers, to people. It reduces natural biodiversity. And all farmers will depend on multinational companies that produce these GMO seeds. For thousands of years, farmers were developing their own seeds. But with the spread of GMOs, each year, farmers have to buy seeds from these biotech companies, and also the herbicides to go with them.”

That’s because GMO crops are designed to withstand herbicides such as glyphosate, commonly known as Roundup. The problem is that repeated use of the chemical has given rise to superweeds that have become resistant to Roundup, said Wilhelm.

“At the end of the day, we’re trying to raise awareness. We hope to send a message to Mr. Obama in Washington,” he said.

Some marchers said that while they are concerned with the possible implications of GMO in food, they understand that some people may want to continue using it. It’s a question of knowing what you’re buying, and a simple label can let people make a choice, said marcher Jean Sobus.

She joined the group in New York, lugging her camping gear there from her Baltimore home.

“I’m a mother. It’s extremely important that my kids have food that’s healthy and not harmful,” Sobus said. “My husband and I and others we know are developing food allergies. It’s shocking to realize you’re getting GMOs without knowing it. I try to buy certified organic foods, but in no way can I be sure. Pollen from GMO crops floats to other, organic crops too.”

Ariel Vegosen of Washington, D.C., said the movement is buoyed by participation from every sector. Representatives from food companies and anti-GMO organizations have joined in.

“It’s rare to have businesses, organizations and regular individuals together in a march for a cause. It shows that every sector is concerned about GMO food,” she said.

For more information on the march, go to Right2knowmarch.org.

email: This email address is being protected from spambots. You need JavaScript enabled to view it. ;