Posted by plantitfilm on Thursday, 16 June 2011 in Earth Violators

The FBI’s War against Green Activists

“Just because you’re paranoid doesn’t mean they aren’t after you.”

Ever wonder where your tax dollars go? I mean besides wars in Iraq and Afghanistan, bailouts for Wall Street and tax cuts for the richest of the rich. 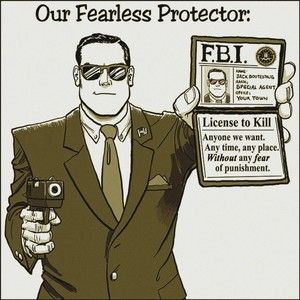 How about our government’s rapidly expanding domestic surveillance apparatus? And I’m not talking about Bush-Cheney using AT&T to monitor our phone conversations or issues around privacy settings on Facebook. While those are important issues as well, a new story developing in the national media is about how the Federal Bureau of Investigation (FBI) uses financial and human resources to persecute anti-corporate animal right and environmental activists.

It’s been recently revealed in the New York Times that my friend and comrade scott crow was the subject of FBI surveillance for the better part of a decade. scott organized direct actions around animal rights, environmental, anti-war and anti-capitalist campaigns with a dozen arrests and never charged with anything more severe than trespassing. scott also was a co-founder of an anarchist grassroots relief effort called Common Ground in New Orleans after Hurricane Katrina.

Through Freedom of Information Act (FOIA) documents, we’ve found out that the FBI dug through scott’s trash, posted a camera on a light post outside his Austin, TX home, kept detailed records on who came and went from his house, tried to get the Internal Revenue Service to come after him and his partner for tax evasion and wanted to bring a grand jury against him. Most alarming, they turned five fellow activists into FBI informants.

Some of scott’s story is my story. I worked with him on many of the anti-corporate actions and campaigns detailed in the FOIA documents. At least two of the five informants were “friends” or “acquaintances” of mine. I also most likely had legal difficulty while traveling in Australia in 2005, which led to my detention, forcible removal and banishment, because of the FBI’s investigation into our work in Texas.

The event in WImberly, TX where “most attendees dressed like hippies, had dreadlocks (both men and women) and smelled of bad odor” was organized by scott, myself, several of our friends and Rainforest Action Network to build momentum against TXU’s proposed 11 new coal fired power plants in 2007. That camp was a multi-racial multi-generational group that included Appalachian and Indigenous women fighting big coal, ranchers, students and my mom and dad.

The writers of that report were two undercover police officers that we ejected from the camp after seeing their police gear and a jacket that read POLICE sitting out in the open of their truck’s cab. Good thing they were just cops spying on bad smelling hippies and not rocket scientists or brain surgeons as small details matter.

Dr. Vandana Shiva once said that the state will use any means necessary to protect capital. Our organizing and campaigning work focused on Texas-based corporations like Exxon, Halliburton and Maxxam. As a loose network of Texas-based grassroots activists and communities, we stood up against these companies that regularly destroy the climate, pollute the air we breathe, clear cut old growth forest, profit from war, violate human rights and steal from their workers. As a result, we had the FBI, local police and a whole range of private security sitting outside our homes and pressuring our friends to inform on us.

The FBI threw the Constitution and any morality out the window a long time ago to protect corporate capitalism. Our history teaches us that the FBI exists not as an organization to investigate criminal activity but to monitor, intimidate, disrupt, prosecute and imprison (if possible) social movements. From the first Red Scare immediately after World War One to COINTELPRO in the 60′s and 70′s to the bombing of Earth First! organizer Judi Bari in 1990, the FBI has made no illusions about their desire to patrol and control movements for change.

It’s been a Not-So-Secret war against left activists for almost 100 years and they have not let up in the slightest.