Posted by bchristo on Monday, 03 September 2012 in Fishing

The controversial super trawler Margiris could be fishing in Australian waters within days after being given the green light by the Environment Minister, Tony Burke, although it will face strict conditions to protect ocean life. 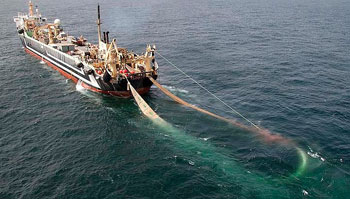 The 142-metre Dutch-owned trawler, which arrived in Australia last week and was greeted by protests by environmental activists, faces only routine hurdles before it can begin fishing for redbait and jack mackerel in waters off Tasmania.

Gerry Geen, the director of Seafish Tasmania, the company that will operate the trawler, welcomed the decision and said the Margiris would start fishing ''hopefully within a week or two''.

Mr Burke intervened nearly three weeks ago after he became concerned the trawler, the largest ever to operate in Australian waters, could cause environmental damage either by accidentally trapping dolphins and other protected sea life or by dramatically depleting fish stocks.

''The conditions I have developed will require the super trawler to adopt world's best practice methods to avoid listed species, particularly seals, dolphins and sea birds being killed or injured during its trawling operations,'' Mr Burke said yesterday. ''I want to ensure that the environmental impact is no more than if the same quota was being fished by a smaller vessel.''