Posted by Wolf on Wednesday, 15 June 2011 in Fossil Fuels

General Motors CEO, Dan Akerson, would like to see the federal gasoline tax boosted by as much as $1 per gallon in order to encourage drivers to choose more fuel efficient vehicles. If you are a politician in office today, it’s of course anathema to talk about raising fuel taxes – unless of course you harbor some sort of political suicide agenda – and it’s at least mildly surprising that a Republican CEO would be a proponent of raising taxes on a product which directly, and potentially adversely, impacts the company he is running. 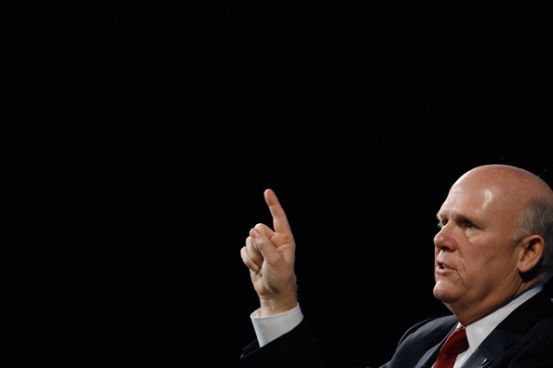 Surprising as it may be, it’s refreshing to hear someone taking an objective position that raising gas taxes can play a part in shaping desirable outcomes. Though, I suppose it should be noted that in this case, the tax hike is Mr Akerson’s preference over alternative federal fuel economy mandates currently under consideration. These could require up to 6% annual fuel efficiency increases between 2017-2025 which Detroit News says would force manufacturers to produce cars that meet up to 62 mpg, while adding $3,500 to vehicle costs. Maybe Mr Akerson deems that too restrictive?

Nevertheless, if we want to enhance fuel economy, the question boils down to whether a fuel economy mandate is a better way to do it than using a price signal – which a tax increase would bring about. If we do what Mr Akerson suggests, there is a solid argument for a fuel tax increase.

Because gasoline taxes in America are so low by comparison with much of the rest of the world, and despite the uproar over $4 plus/gallon gasoline, American’s still enjoy far lower prices than most other developed nations. Historically, this has allowed the American consumer to care far less about fuel economy, directly driving up consumption. This is neither advanced economics nor a news-flash. However, I invite you to click on this article from the Economist, which makes the case that such high oil consumption makes Americans far more vulnerable to the volatile oil prices we’ve seen in recent years. Pay particular note to the chart on the amount of tax and duties paid in Western Europe – often over 50% of retail price; strikingly higher than in the US.

The significance of this comparison is that Europeans have been driving around in fuel efficient cars for years because higher taxes have already forced them to confront expensive fuel. Consequently, even before $100 per barrel oil prices, Europeans had started to choose efficient cars and use less oil. A consequent side effect is that when crude oil prices spike, it impacts Europeans less acutely than Americans. But the main point is that whether you are a fan of such taxes or not, if we consider tax policy purely as a mechanism to engender fuel efficiency – that mechanism appears to work. This is evidenced by Europe’s experience and it’s not a lever that has really been pulled in America.

The US Department of Transportation provides this interesting look at America’s federal gasoline tax history. The motorist is paying just 18.4 cents a gallon in tax today. At $4/gallon, that’s around 4.5%, a far cry from the rate of 50% or so that Europeans pay. So, whereas we might not (and frankly should not) stomach similar tax rates, there is some scope to strike a middle ground somewhere. As well as reducing consumption, increasing gas taxes would raise revenue to pay for highway and other infrastructure upgrades that are desperately needed. And it has not been raised for nearly two decades, last adjusted on August 10th 1993, when it was raised to current levels by 4.5 cents – an increase imposed to help offset the deficit. We face a familiar deficit problem today, and it’s another use of revenue that could be raised by higher gas tax.

So, in summary: Increased gas tax revenue can help stimulate fuel efficiency, while at the same time raise revenue the government could usefully direct towards both infrastructure spending and deficit reduction. That sounds somewhat compelling, but to close, a word on the deficit.