Posted by henryfool on Wednesday, 15 June 2011 in Environmental Heroes

Since 1989 Weaver has been studying climate issues and, more recently, trying to get governments to act decisively to reduce greenhouse gas emissions, largely from burning of fossil fuels. He’s now come to the conclusion that the federal government isn’t interested, and that it’s time to concentrate on Canada’s youth — the next generation of leaders. 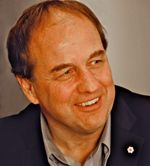 “Leadership will have to be grassroots, starting with the consumer and the youth of today,” he said, citing public demand for organic food and fuel-efficient vehicles as two encouraging examples. “I have absolutely given up on Ottawa ever showing any leadership on this.”

Weaver, a research chair in climate modelling and analysis, was a lead author in the United Nations Intergovernmental Panel on Climate Change, and, as such, a co-recipient of the Nobel Peace Prize in 2007.

He’s now the author of Generation Us: The Challenge of Global Warming, a compact easy-to-understand book by Raven Books aimed at Grade 10 students and selling in Canada, the U.S., United Kingdom, and Australia.

Weaver says that global warming is a problem created by the current generation but foisted on the next — a youthful generation that’s been slow to engage in the democratic process and elect politicians at all levels who take progressive positions on environmental sustainability.

“If you want change, you have to be part of our democracy,” he said.

Weaver believes that if youths understand the science behind the problem, they are more likely to take an interest in affecting change, and stop using the planet as a dumping ground to everyone’s detriment. “This is one of the most exciting self-empowering issues of our time,” he concluded.