China's River Systems Are All Polluted

The overall environmental situation in China is very grim with all seven major river systems polluted, according to Li Ganjie, Vice Minister of the Chinese Ministry of Environmental Protection, speaking at a press conference on June 3 to discuss the Report of the State of the Environment of China (2010). 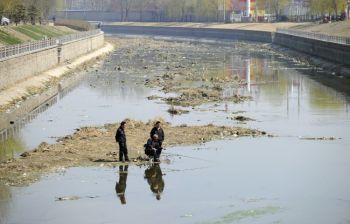 However, Li refused to comment on recent discussion among the general public that the severity of the current drought is due to the Three Gorges Dam.

Li said the surface water pollution across the country is still relatively grave. China uses a six-grade classification scheme for water quality. Grade 1 is the best, water no worse than grade 3 can be used for drinking, but sometimes requires treatment, and water worse than grade 5 cannot be used for irrigation.

Eutrophication of lakes (reservoirs) is still a prominent problem—an excess of nutrients, for example from fertilizer runoff, causes algal bloom and subsequent problems such as hypoxia or lack of oxygen. Eutrophication was found in 11 of the 26 water bodies tested.

This year, the lower portion of the Yangtze River was hit with the worst drought in 50 years, causing problems for fisheries in the Jiangsu, Anhui, Jiangxi, Hubei, and Hunan Provinces, and leaving many people without drinking water.

Li admitted that the Hubei, Hunan, and Jiangxi Provinces are currently experiencing severe drought, where water levels are at their lowest position in several large lakes, including Poyang Lake, Dongting Lake, and Hong Lake. This is a problem that has occurred very rarely in recent decades.

Since the completion of the Three Gorges Dam in 2006, the middle and lower portions of the Yangtze River have suffered drought every year with lake water levels decreasing continuously. When asked if the Three Gorges Dam has contributed to the severity of this year’s drought, Li did not respond. Li said that in terms of ecological and environmental protection, the impact of the drought is very large. The monitoring data show that water quality has also diminished significantly due to substantial reduction in lake water levels.
Gao Jianguo, a scientist at the Institute of Geology of the China Earthquake Administration, said that the Yangtze River is actually draining water from some of the lakes.

“The operation of the Three Gorges project broke the existing water flow patterns," Gao said."Using Poyang Lake as example, the Three Gorges reservoir stores up water every October, but this is also when the lake in Jiangxi Province dries up," he continued. "The Poyang Lake really needs water at this time, but the result is, not only was water not added, but the low water level in the Yangtze River pulls water from the lake and dries it up.” Renowned German hydraulics expert Wang Weiluo said that the major drought in the lower portion of Chang Jiang started in March this year. The main cause was lack of rain, but the Three Gorges Dam accelerated the drought.Hydraulics experts in Hunan, Jiangxi, and other provinces have pointed out problems with the balance of water levels between Poyong Lake and Dongting Lake. Due to the Three Gorge Dam, the balance was disrupted, and has now entered a state of disharmony. Nature itself has built-in mutual recovery mechanisms, but they have been destroyed by the Three Gorges Project.
China's state-controlled media said the regime is releasing water in the Three Gorges reservoir to alleviate the drought, but Wang believes that in reality it does not really want to fight the problem, and is simply concerned there might be a flood later. According to the operations plans for the Three Gorges Dam, the reservoir water level must be decreased to 145 meters above sea level in early June to prevent flooding that could happen later this month.
The quality of coastal waters in China also drew concerns. Li said the average pollution level is low among the four major coastal areas (the Yellow Sea, South China Sea, Bohai Sea and East China Sea), but 23.2 percent of the coast has areas with a relatively bad grade of 4. “The Yellow Sea and South China Sea coastal water quality is good, the Bohai Sea coastal water quality was poor, and the East China Sea water quality is very poor,” Li said. However, he did not provide an explanation as to why the water quality in the East China Sea coast is so poor.

When asked about the many occurrences of heavy metal pollution, Li claimed that nine of the 14 incidents in 2010 were due to lead, and the seven incidents in the first five months of 2011 were all lead-related.