Posted by EarthDude on Friday, 03 June 2011 in Fossil Fuels 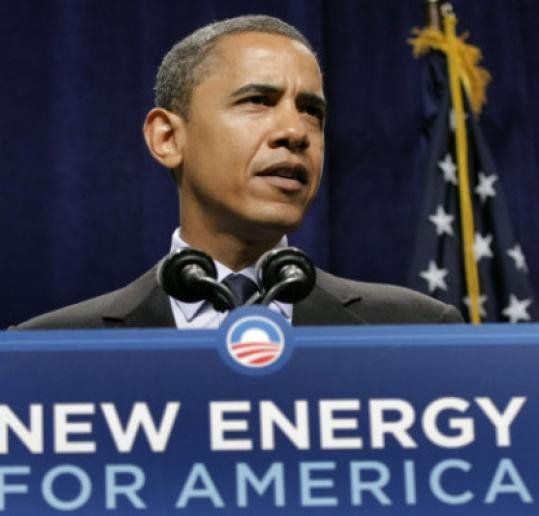 He promised to slow the ocean's rise, but Obama has opened the mine gates. Luckily, tough terrain is fighting back

In our globalised world, old-fashioned geography is not supposed to count for much: mountain ranges, deep-water ports, railroad grades – those seem so 19th century. The earth is flat, or so I remember somebody saying.

But those nostalgic for an earlier day, take heart. The Obama administration is making its biggest decisions yet on our energy future and those decisions are intimately tied to this continent's geography. Remember those old maps from your high-school textbooks that showed each state and province's prime economic activities? A sheaf of wheat for farm country? A little steel mill for manufacturing? These days in North America what you want to look for are the pickaxes that mean mining, and the derricks that stand for oil.

There's a pickaxe in the Powder River Basin of Montana and Wyoming, one of the world's richest deposits of coal. If we're going to have any hope of slowing climate change, that coal – and so all that future carbon dioxide – needs to stay in the ground. In precisely the way we hope Brazil guards the Amazon rainforest, that massive sponge for carbon dioxide absorption, we need to stand sentinel over all that coal.

Doing so, however, would cost someone some money. At current prices the value of that coal may be in the trillions, and that kind of money creates immense pressure. Earlier this year, President Obama signed off on the project, opening a huge chunk of federal land to coal mining. It holds an estimated 750m tons worth of burnable coal. That's the equivalent of opening 300 new coal-fired power plants. In other words, we're talking about staggering amounts of new CO2 heading into the atmosphere to further heat the planet.

As Eric de Place of the Sightline Institute put it: "That's more carbon pollution than all the energy – from planes, factories, cars, power plants etc – used in an entire year by all 44 nations in Central America, South America and the Caribbean combined." Not what you'd expect from a president who came to office promising that his policies would cause the oceans to slow their rise.

But if Obama has admittedly opened the mine gate, it's geography to the rescue. You still have to get that coal to market, and "market" in this case means Asia, where the demand for coal is growing fastest. The easiest and cheapest way to do that – maybe the only way at current prices – is to take it west to the Pacific where, at the moment, there's no port capable of handling the huge increase in traffic it would represent.

And so a mighty struggle is beginning, with regional groups rising to the occasion. Climate Solutions and other environmentalists of the north-west are moving to block port-expansion plans in Longview and Bellingham, Washington, as well as in Vancouver, British Columbia. Since there are only so many possible harbours that could accommodate the giant freighters needed to move the coal, this might prove a winnable battle, though the power of money that moves the White House is now being brought to bear on county commissions and state houses. Count on this: it will be a titanic fight.

Strike two against the Obama administration was the permission it granted early in the president's term to build a pipeline into Minnesota and Wisconsin to handle oil pouring out of the tar sands of Alberta. (It came on the heels of a Bush administration decision to permit an earlier pipeline from those tar sands deposits through North Dakota to Oklahoma). The vast region of boreal Canada where the tar sands are found is an even bigger carbon bomb than the Powder River coal. By some calculations, the tar sands contain the equivalent of about 200 parts per million CO2 – or roughly half the current atmospheric concentration. Put another way, if we burn it, there's no way we can control climate change.

Fortunately, that sludge is stuck so far in the northern wilds of Canada that getting it to a refinery is no easy task. It's not even easy to get the equipment needed to do the mining to the extraction zone, a fact that noble activists in the northern Rockies are exploiting with a campaign to block the trucks hauling the giant gear north. (Exxon has been cutting trees along wild and scenic corridors just to widen the roads in the region, that's how big their "megaloads" are.)

Unfortunately, the administration's decision to permit that Minnesota pipeline has made the job of sending the tar sand sludge south considerably easier. And now the administration is getting ready to double down, with a strike three that would ensure forever Obama's legacy as a full-on carbon president.

The huge oil interests that control the tar sands aren't content with a landlocked pipeline to the midwest. They want another, dubbed Keystone XL, that stretches from Canada straight to Texas and the Gulf of Mexico. It would take the bitumen from the tar sands and pipe it across the heart of America. Imagine a video game where your goal is to do the most environmental damage possible: to the Cree and their ancestral lands in Canada, to Nebraska farmers trying to guard the Ogallala aquifer that irrigates their land, and of course to the atmosphere.

But the process is apparently politically wired and in a beautifully bipartisan Washington way. Secretary of state Hillary Clinton must approve the plan for Keystone XL because it crosses US borders. Last year, before she'd even looked at the relevant data, she said she was "inclined" to do so. And why not? I mean, the company spearheading the Keystone project, TransCanada, has helpfully hired her former deputy national campaign director as its principal lobbyist.

Meanwhile, on the other side of the political aisle, those oil barons the Koch brothers and that fossil fuel front group the US chamber of commerce are pushing for early approval. Michigan Republican congressman Fred Upton, chair of the house energy committee, is already demanding that the project be fast-tracked, with a final approval decision by November, on the grounds that it would create jobs. This despite the fact that even the project's sponsors concede it won't reduce gas prices. In fact, as Jeremy Symons of the National Wildlife Federation pointed out in testimony to Congress last month, their own documents show that the pipeline will probably cause the price at the pump to rise across the midwest.

When the smaller pipeline was approved in 2009, we got a taste of the arguments that the administration will use this time around, all masterpieces of legal obfuscation. Don't delay the pipeline over mere carbon worries will be the essence of it.

Global warming concerns, said deputy secretary of state James Steinberg then, would be "best addressed in the context of the overall set of domestic policies that Canada and the United States will take to address their respective greenhouse gas emissions". In other words, let's confine the environmental argument over the pipeline to questions such as: how much oil will leak? In the meantime, we'll pretend to deal with climate change somewhere else.

It's the kind of thinking that warms the hearts of establishments everywhere. Michael Levi, author of a Council on Foreign Relations study of the Canadian oil sands, told the Washington Post that, with the decision, "the Obama administration made clear that it's not going to go about its climate policy in a crude, blunt way". No, it's going about it in a smooth and … oily way.

If we value the one planet we've got, it's going to be up to the rest of us to be crude and blunt. And happily that planet is pitching in. The geography of this beautiful North American continent is on our side: it's crude and blunt, full of mountains and canyons. Its weather runs to extremes. It's no easy thing to build a pipeline across it, or to figure out how to run an endless parade of train cars to the Pacific.

Tough terrain aids the insurgent; it slows the powerful. Though we're fighting a political campaign and not a military one, we need to take full advantage.