Posted by Wolf on Tuesday, 03 May 2011 in Wildlife Conservation

In the forests of Italy's Abruzzo National Park live one of the rarest creatures on Earth: the Marsican brown bear. For the last several decades the species has been on the brink of extinction -- with current estimates putting their population at less than 50 individuals, down from over 100 in the early 1980s. Recently, a program funded by the EU set out to help preserve the threatened animals, though a sad event today suggests that it may not be enough. 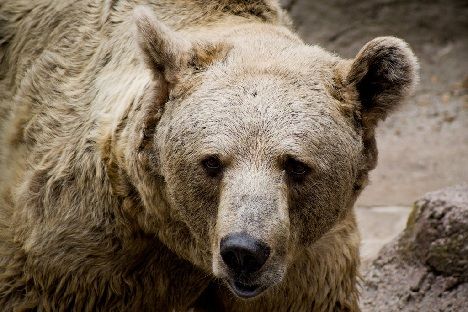 Sadly, threats facing the marsican bears are far more numerous than the bears themselves -- from poison intended for other animal and illegal hunting to human development and vehicle strikes. Most, if not all, remaining individuals -- members of a subspecies of European brown bear -- are thought to be living under protection in Abruzzo National Park, but that fact alone hasn't managed to curb their decline.

In fact, it may already be too late to save the bears. Park administrator Giuseppe Rossi told The Christian Science Monitor that she believes the animal's numbers are ""below the threshold of survival."

And just today, word is that a marsican bear was found dead along the roadside -- presumably having been struck by a car.

For as bleak as the bears' outlook may be, The Monitor reports that efforts are underway to help preserve the less than fifty remaining individuals:

A new conservation initiative, the €5 million ($7.3 million) Life Arctos project, partly funded by the European Union, is due to run until 2014. Efforts will include putting electric fences around beehives and vegetable gardens to deter the beasts from foraging for food near human populations. Volunteers will plant fruit-bearing trees to which the bears are especially partial, encouraging them to search for food up in the hills rather than around settlements.

Marsican brown bears are the largest land-dwelling species native to Italy. But despite their imposing stature, after decades of struggling for their very survival against extinction, no preservation measures may be enough to keep them from it.