Endangered Animals on the Run From Extinction 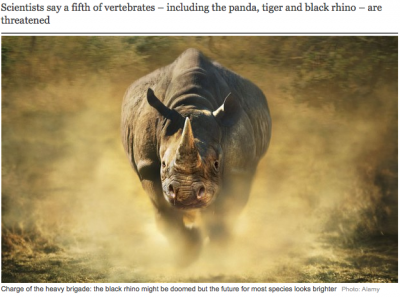 Here are some grounds for hope. For decades, scientists and environmentalists have believed that we are driving so many species to extinction that there is little chance of preventing the world undergoing another mass extinction – such as the five that wiped out up to 95 per cent of species over the past 600 million years, most recently causing the destruction of the dinosaurs.

What is more, they added, it is happening so fast that, in the California Academy of Sciences’ words, “many are disappearing before we even know they exist” – perishing before they have even been discovered and named, let alone studied, by science.

It is was as if we were burning a vast library before even cataloguing the titles of its books, let alone studying their contents. And that’s serious because what wildlife can teach us, for example, saves lives: half of all drugs, and three quarters of those used to fight cancer, originate in wild species.

But a new paper – published in Science, and reported in yesterday’s Daily Telegraph – offers hope that this need not be so. Most species, it says, should not die out before discovery. That is partly because three times as many scientists as had been thought are working on identifying them, and that there seem to be very many fewer species than had been estimated. But, crucially, it is also because the rate of extinction seems to be much slower than has been feared.

The paper will be controversial, but it does not lack authority. One of its three authors is Lord May of Oxford who – as Bob May – was both the Government’s chief scientist and president of the Royal Society. And he is no sceptic: just a few years ago, he warned that the world was “on the breaking tip of a sixth great wave of extinction”. Indeed, the paper warns that the wildlife crisis is still very serious, and is likely to be made much worse by climate change.

Scientists have been fascinated for at least 250 years by how many species there are on earth – Darwin was just such one to be intrigued – and curiosity may go back to the time of Noah. But nobody knows. You can’t just go out and count them, not least because so many remain undiscovered. And most are small and obscure. The vertebrate species that immediately spring to mind – mammals, birds, reptiles, amphibians and fish – are thought to number only about 45,000: the vast majority are insects, fungi and plants.

Estimates vary from two to 100 million – which gives some idea of how little is known – but the paper plumps for the bottom end of the scale, giving its best guess as some five million. Recent research suggests, for example, that insect species range much more widely than had been thought, so there may be far fewer of them, covering larger areas.

Again, nobody knows how many are dying out. Only some 1,200 extinctions have been officially recorded over the past 400 years, but this tells us nothing about the present; to qualify, a species has to disappear for 50 years, and it is during the past half-century that the assault on nature has escalated.

And while scientists are reasonably confident that about a fifth of vertebrates – including the charismatic panda, tiger and black rhino – are threatened, the fate of most species remains obscure.

The arch-doomster Paul Ehrlich ludicrously forecast in 1981 that half the world’s species would be lost by 2000, suggesting that by around now virtually none might be left. More respectably, a 1998 survey found that 70 per cent of biologists thought a fifth of all species would be extinct by 2030. Many experts now estimate that the world is losing 5 per cent a decade, which means the number would halve by 2150. But the new paper puts it at just 1 per cent.

It reckons that conservation measures have made a big difference, that many species hang on longer than expected, and that many tropical forest ones manage to move to the trees that regenerate once cleared land is abandoned.

Many scientists will dispute this optimism. And even the paper agrees that “a human-caused mass extinction” is under way. Besides, its authors add that climate change threatens to make a dramatic difference, especially when combined with the habitat loss that is already taking place. If the world misses its vanishing goal of keeping warming beneath two degrees centigrade, says one – Prof Nigel Stork, of Griffith University, Brisbane – the dire predictions will turn out to be true after all.

But at least – if Lord May and his colleagues are right – we have a chance to avoid the mass extinction that once seemed inevitable.

Heart and lung deaths linked to decline in tree population

Laughter, they say, is the best medicine. But a new study suggests that the most unexpectedly effective treatment might, instead, be trees.

The research, published in the American Journal of Preventive Medicine, found that deaths from heart and respiratory diseases rose in 1,296 US counties when an imported pest, the emerald ash borer, killed tens of millions of trees – sometimes entirely denuding once-leafy streets.

Far-fetched? Maybe, but trees do decrease stress: another US study found that hospital patients with views of them recovered faster and required less medicine than those whose windows looked on to a brick wall. And trees reduce air pollution and encourage outdoor activity, further reasons – the researchers think – why more people perished when the pest struck.

Studies have found that people living in leafier areas are healthier, but this could just be because they also tend to be richer. However, the new research stands this apparent advantage on its head: the richest people – who lived in the greenest surroundings and thus lost the most ash – suffered the greatest casualties when the trees died.

As ash dieback spreads through the shires, should we fear more residents, er, dropping off the twig?

As the Green Deal goes live, does it have enough support?

On Monday, the Government launches one of David Cameron’s pet projects. Indeed, he thought up its name. But even its friends fear the Green Deal will be another omnishambles.

It’s a good idea – lending people money up front to improve the energy efficiency of their homes, who pay back a proportion of the savings via their energy bills. But so far, as this newspaper reported this week, only five households have signed up. Ministers believe a publicity drive and a “cashback” offer that can give adopters hundreds of pounds immediately will turn things round.

But critics say the interest rates charged – though much lower than those applied to credit cards – are too steep to be attractive. And Eric Pickles, the Communities Secretary, dealt the scheme a deadly blow by scrapping the main measure that had been planned to drive it forward: a requirement that people building extensions to their homes also improve the efficiency of the original building. So badly did he do it that he is likely to face a judicial review.

This Government has been the first to take energy efficiency seriously, but now risks looking incompetent (again). Time for the Prime Minister to intervene?