Posted by amandaevans on Sunday, 14 July 2013 in Animals

Iberian lynx brought back from extinction 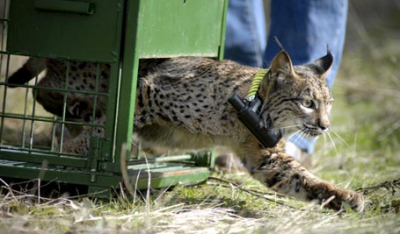 Ten years ago the Iberian lynx was nearing extinction but today, thanks to an imaginative conservation program that has brought hunters, farmers and the tourist industry under its wing, its numbers have tripled from 94 to 312.

"We can't claim victory yet but now there is hope," said Miguel Ángel Simón, the director of the program for the recovery of the lynx in Andalusia, southern Spain. Only five years ago the animal was classified as critically endangered.

The project, which is jointly funded by the Andalusian government and the European Union, has been singled out for the second time by the EU as an exemplary conservation program. Brussels is funding 40% of the €26m (£22m) needed to extend the project into the neighboring regions of Extremadura, Castile-La Mancha and Murcia, as well as Portugal.

According to Simón, when they first carried out a census in the lynx's key habitats in the Sierra Morena and the Doñana national park, not only were there few lynxes but the rabbit population had also been severely depleted by disease. Rabbits are the lynx's main source of food.

Simón says they began breeding lynxes in captivity in case they became extinct in the wild.

When the current project was launched in 2006 the Andalusian government worked with farmers and hunting clubs and persuaded them that saving the lynx was in everyone's interest.

Lynx-spotting has become a tourist attraction in the area; as well as creating 31 full-time jobs, forestry work carried out under the program has provided much-needed work for hundreds of small businesses in the area. Unemployment in Andalusia is running at nearly 37%.

The second phase of the program involved trying to expand the narrow gene pool of the lynxes in the Doñana region. Lynxes from the Sierra Morena were released into the area and, thanks to the efforts of one male in particular, nicknamed Caribou, last year 61% of new-born lynxes in Doñana were descended from Sierra Morena animals. In May 2014 the third phase of the program will begin, introducing animals into Portugal and other regions.