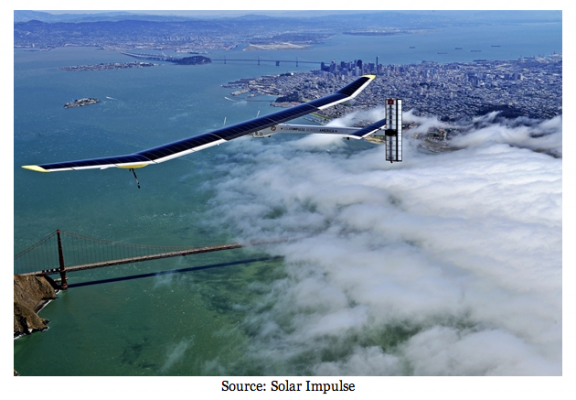 Someone once said: "Your vocation in life is where your greatest joy meets the world's greatest need."

Without question, the pilots of Solar Impulse, Dr. Bertrand Piccard and Andre Borschberg, are living proof of that. These two great adventurers made solar and aviation history last weekend when Solar Impulse touched down at New York's JFK Airport.

For several months, millions of Americans, and millions of others from around the world, watched and cheered as this majestic 208-foot-wide, carbon fiber solar plane -- with the wingspan of a Boeing 747 and the weight of a Volkswagen -- glided gracefully across the sky.

From the Golden Gate Bridge in San Francisco to the Gateway Arch in St. Louis to the Statue of Liberty in New York, Solar Impulse traveled over 3,500 miles and straight into history.

Now, the next challenge is to fly around the world in 2015.

Solar Impulse is the first airplane ever to fly day and night without fuel or polluting emissions, and it's also the first solar airplane to fly internationally. According to CleanTechnica, "With its 12,000 silicon solar cells -- designed, developed and manufactured by SEIA member SunPower of San Jose, CA -- Solar Impulse is also equipped with state-of-the-art batteries that store power, allowing it to fly around-the-clock -- something which has never been done before. In 2015, Solar Impulse will try to become the first solar plane to fly around the world."

And by the way, those high-efficiency silicon solar cells were made right here in the good ol' USA. They were designed, developed and manufactured by one of our member companies, SunPower, which is headquartered in San Jose, California.

Today, solar is one of the fastest-growing industries in the United States -- providing good paying jobs for nearly 120,000 Americans at more than 5,600 companies, many of them small businesses spread all across the country. In fact, solar job growth has doubled in the past three years alone. There is now more than 8,500 MW of cumulative solar electric capacity in the United States - enough to power more than 1.3 million American homes.

From January through March of this year, solar accounted for 48 percent of all new electric capacity installed in the U.S.

The residential solar market grew by 53 percent over the same quarter in 2012.

And presently more than 30 utility-scale, clean energy projects are under construction, putting thousands of American electricians, steelworkers and laborers to work.

Simply put, solar is a great American success story. Many of our nation's leading companies -- such as Apple, Berkshire Hathaway, FedEx, GE, GM, IKEA, Macy's, Target, Walgreen's and Walmart -- are all making big investments in solar.

What's more, the U.S. military is increasingly turning to solar energy to reduce costs and improve battlefield readiness and security. Many of the cutting-edge technologies being used by our military have actually been adapted for use from innovative consumer products.

Solar Impulse will help our industry to soar even higher. Its flight across America has inspired us, motivated us -- and most importantly -- reminded us that anything is possible when we look to the sky and dare to dream.

As the Solar Impulse team begins preparations for its record-breaking solar flight around the world in 2015, we will be cheering them on at every step of the way, while remembering the words of famed aviator Amelia Earhart: "Never do things others can do and will do -- if there are things others cannot do or will not do."

Good luck, Bertrand and Andre. Safe voyages as you travel around our amazing world. In spirit, we will be your co-pilots, wherever this remarkable journey takes you.