Drilling in the Gulf

Federal regulators on Friday gave Statoil permission to drill a deep-water well - the 10th project approved since such work was halted after last year's Gulf spill. 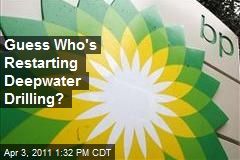 Under the permit, Statoil will be allowed to drill a new well in 7,813 feet of water in its Logan prospect, 219 miles off the Louisiana shoreline, south of Houma. The Norwegian oil company is slated to drill the well with the Discoverer Americas, a Transocean drillship that is en route back to the Gulf of Mexico from Egyptian waters.
It is the second post-spill deep-water project Statoil has gotten approved. The company also won approval for a well in its Cobra prospect 216 miles south of Texas City on March 25.
Statoil contracted with the Houston-based Helix Well Containment Group to meet requirements that it show how it will respond to any blowout at the Cobra project. It has contracted the competing Marine Well Containment Co. for the new Logan prospect well - becoming the first operator to contract with both containment companies on separate Gulf drilling projects.

In a signal that the regulators now consider the approval of deep-water drilling permits routine, the Bureau of Ocean Energy Management, Regulation and Enforcement said it no longer will highlight them in news releases for reporters.
Michael Bromwich, the bureau's director, also told MSNBC that deep-water permitting won't be delayed while the government develops new mandates to strengthen emergency equipment called blowout preventers.
"You can always improve the equipment that is being used," Bromwich said Thursday night on The Rachel Maddow Show. "But that doesn't mean you bring activities to a standstill until you've enhanced those rules."
Bromwich made the comments as he finished a four-day swing through California, Washington and Oregon universities to recruit environmental scientists who can conduct stepped-up reviews of offshore exploration plans. Bromwich and other bureau officials are set to visit schools in Louisiana, Texas and other states later this month.
The agency collected more than 300 résumé s from aspiring environmental scientists during the West Coast leg of the recruiting tour.

"I think it shows the level of interest in our agency and in the expansion of our environmental science capabilities and in playing a role in the new era that we'll be seeing in BOEMRE," Bromwich told reporters in a conference call from Southern California, where he was meeting with students at two universities.

A similar push to recruit petroleum engineers and drilling experts last year also netted interest, but the agency still hasn't gotten approval to boost salary and other benefits for engineers and geoscientists, who can earn more from oil companies.
"People in industry make a tremendous amount more," he said.
Separately, Bromwich confirmed that federal officials have talked with Spain's Repsol about its plans to drill off Cuba later this year but haven't made a deal to ensure that work meets the same standards it would if it were in U.S. waters.

Repsol has said it plans to begin drilling a well as soon as this summer in Cuban waters. Other international oil companies have lined up drilling afterward, including Malaysia's Petronas and India's ONGC Videsh. Cuban officials have said five wells could be drilled in the country's Gulf of Mexico territory.
U.S. regulators have been meeting with their counterparts in Mexico to hammer out a uniform standard for offshore drilling in the Gulf. But Cuba was not part of discussions earlier this week in Mexico City.

"Everyone has an interest in there being the highest standards possible that are observed in all of the drilling offshore, in all three countries that co-own the Gulf of Mexico," Bromwich said. "That would certainly be desirable, but finding the mechanism to do that is tricky and needs to be explored further."