Posted by Angel on Sunday, 04 November 2012 in Climate Change 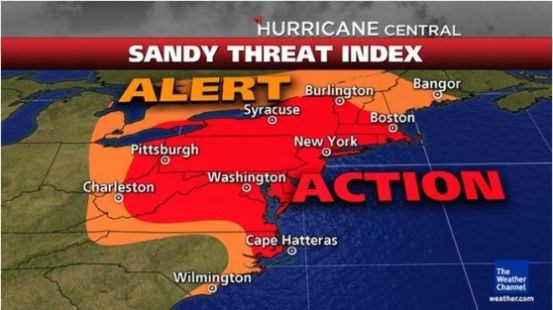 Hurricane Sandy is now a gauge of the region’s new fragility. Climate change and extreme weather are presenting government — and the public — with some overwhelming choices.

The authorities must not only reopen the Queens-Midtown Tunnel, but also ponder whether to put up sea gates or install inflatable plugs to protect it. Shorted-out circuits in Consolidated Edison’s flooded substation in the East Village stand a foot off the ground in metal sheds. They always seemed impervious to flooding but no longer are.

In New Jersey, the historic Hoboken train terminal had five feet of water sloshing in the waiting room and switches and power substations exposed to salt water. Will it do just to dry them out?

More broadly, officials must ask whether it is sensible to replace buildings on the Manhattan waterfront, the Jersey Shore or the Long Island coast — and continue to dare nature. After all, the waters surrounding New York have been rising an inch a decade, and the pace is picking up.

In recent days, elected officials, including Gov. Andrew M. Cuomo, a Democrat, have warned that bold steps are needed, that to simply mop up is a fool’s errand. Experts agree.

“It’s a no-brainer for New York,” said J. David Rogers, a professor of geological engineering at the Missouri University of Science and Technology.

“You’ve got such enormous assets and infrastructure that you want to protect.”

But some experts also say that after rhythms return to normal, a no longer frazzled public may rebel if taxes and fees rise sharply to pay for better defenses.

The cost of the repairs alone will certainly reach tens of billions of dollars. Far-reaching solutions will cost many billions more.

And the cost of not doing them, Professor Rogers said, includes the threat that disrupted businesses might abandon an environment that feels unsafe. New Orleans, he noted, was the banking and insurance capital of the South until the great flood of 1927.

There is evidence of what is possible. The Netherlands, one of the world’s lowest-lying countries, has made storm protection a function of national security.

Following the severe flooding in 1953 that killed more than 1,800 people in the Netherlands, the Dutch strengthened their oceanfront defenses to what is known as 10,000-year protection — something that will repel a menace that has a 0.0001 percent chance of occurring in a given year. With climate change rejiggering storm calculations, there is talk of elevating that protection to the 100,000-year level.