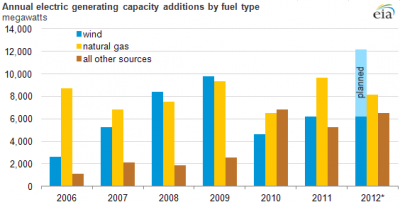 I’m pleased to report that it didn’t take long to achieve one of my new year’s resolutions for Congress – extending the federal tax credits for wind power and other renewable energy sources. The deal to avert the so-called “fiscal cliff” that passed the Senate and the House yesterday, and is expected to be signed by the President, includes an important extension of federal tax credits for wind and other renewable energy projects that begin construction in 2013. This will temporarily help the wind industry from going off its own cliff. Happy New Year indeed!

As UCS President Kevin Knobloch recently indicated in a response to Sen. Alexander (R-TN),extending the tax credits for renewable energy is very good news for the U.S. economy. It could save 37,000 jobs, or nearly half of the 75,000 workers currently employed in the industry, according to the American Wind Energy Association. It will also help keep the nearly 500 domestic wind turbine and components manufacturing facilities humming. These facilities are producing more than two-thirds of the equipment installed in the U.S., up from 35 percent in 2005.

While the final numbers are not in yet, it is clear that the U.S. set a new record in 2012 by installing more than 12,000 megawatts (MW) of new wind capacity.  This made wind power America’s leading source of new electric generation capacity, representing 45 percent of total capacity additions. Wind even beat out natural gas, which came in a distant second at 30 percent.

The new wind facilities installed in 2012 represented an investment of more than $21 billion in the U.S. economy, based on preliminary 2012 data on average installed costs from the U.S. Department of Energy. The tax credits, combined with state renewable electricity standards and other policies that are driving these investments, are also making wind power more competitive with natural gas and other energy sources. The DOE report also shows that installed costs have declined by about 20 percent over the past two years.

While the short-term tax credit extension is worth cheering about, it will only provide temporary relief to the wind industry and other renewable energy sources. Because it can often take 18-24 months to develop a wind project, secure financing, and sign a power purchase agreement, U.S. wind development is expected to be slow in 2013. In addition, many wind component manufacturers have already laid people off and orders have slowed down because of the long delay in extending the credit.

With the fiscal cliff temporarily averted and the tax credit extension behind them, it’s time for Congress to pursue my other new year’s resolutions. Strong long-term policy support at both the state and national levels is essential to ensure continued growth of the renewable energy industry, create new jobs, lower costs, and overcome market barriers.

Adopting a strong national standard for renewable electricity is one important policy to accelerate the transition to renewable energy. Twenty-nine states and 18 countries are already successfully demonstrating that this is an effective and affordable approach. Targeted incentives and increased funding for research and development are also important for lowering the costs of renewable energy technologies.

A national commitment to deliver deep cuts in carbon and other heat-trapping emissions is also critical to avoid the worst impacts of climate change and to help level the playing field between fossil fuels and cleaner, low carbon energy sources. In a statement yesterday, President Obama said that the fiscal cliff deal will allow him and the incoming Congress to focus on other priorities in 2013, including “protecting our planet from the harmful effects of climate change, [and] boosting domestic energy production.” Fortunately, renewable energy is well suited to accomplish both these objectives.

This post was written by Steve Clemmer, Director of Energy Research & Analysis for the Union of Concerned Scientists, and first appeared on UCS’ blog The Equation on January 2. You can find the original post here.