Posted by greenmonkey on Thursday, 17 January 2013 in Animals

Wood bison one step closer to a return to the wild

Federal and state wildlife officials have reached an agreement that could lead to the reintroduction of wood bison, a species that inhabited Alaska before the 1900s. 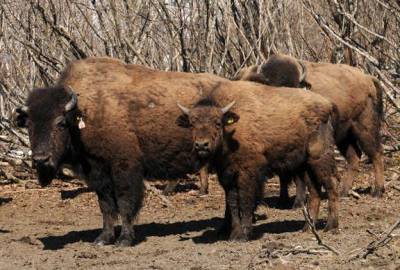 Wood bison are listed as a U.S. endangered species and are found in the wild only in Canada.

The Fairbanks Daily News-Miner (http://bit.ly/W0Dohq) reports that the U.S. Fish and Wildlife Service and the state Department of Fish and Game have drafted a special rule and would designate reintroduced wood bison as a "non-essential, experimental" population. That means the land wood bison occupy when they are set free in the wild would not be designated critical habitat, which could restrict resource development.

The draft agreement also allows the state to manage future hunting or harvest of the animals.

The rule was created under a provision of the Endangered Species Act that allows the reintroduction of a species where it used to live but has since been driven out or exterminated.

State game officials for 20 years have worked to reintroduce wood bison, which are larger subspecies of American bison than plains bison. Plains bison are not native to Alaska but were introduced to the state in 1928, according to the state wildlife website. The largest herd is near Delta Junction.

The state in 2008 imported 53 wood bison from Canada, adding to a smaller herd that was held at the Alaska Wildlife Conservation Center in Portage.

Two years later, state officials wanted to release wood bison in the Yukon Flats, the last place the animals had been documented. However, federal wildlife officials rejected the proposal because the area is a national wildlife refuge.

A second release site, the Minto Flats about 20 miles west of Fairbanks, drew opposition from Alaska Native regional corporation Doyon Ltd., which was considering exploration for oil and gas in the area.

The department's preferred release site currently is the Innoko Flats in southwest Alaska.

The agencies plan a news conference Thursday afternoon to announce the draft rule. The public will have 60 days to comment.

Doug Vincent-Lang, director of the state Division of Wildlife Conservation, called the draft rule "a positive step in the right direction" but warned it could be modified.

"The state is going to reserve its decision to release wood bison on the landscape pending review of the final rule," Vincent-Lang said. "Rules can change from draft version to final version."