Posted by ScottyB on Wednesday, 20 March 2013 in Green Design 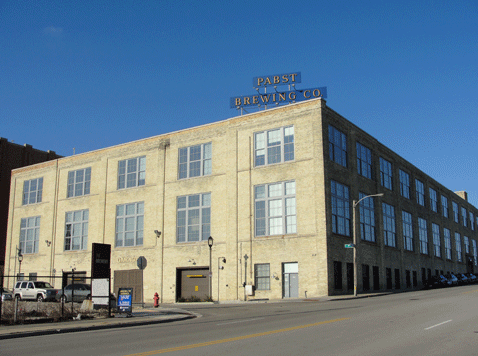 A hilltop site once famous for brewing Pabst Blue Ribbon beer, was named one of the greenest neighborhoods in the world Tuesday.

The redevelopment project at the former Pabst Brewing Company known asThe Brewery won the highest designation for sustainable development practices from the U.S. Green Building Council. It was one of three neighborhoods in the U.S. and five in the world to be granted the LEED Platinum designation.

The building council’s “neighborhood designation” is a new LEED category, given to entire swaths of development rather than individual buildings and projects. Awarded in conjunction with the Congress for New Urbanism and the Natural Resource Defence Council, it addresses wider issues of smart growth strategies and infrastructure.

The Brewery was given its designation for more than 20 acres of development, a site purchased in 2006 by Joseph Zilber. The area includes several completed projects, including the University of Wisconsin-Milwaukee’s Zilber School of Public Health, Cardinal Stritch University’s College of Education and Leadership, the Blue Ribbon Brewery Lofts apartment building, the Best Place pub, Brewery Point senior housing, office buildings, a parking garage and a public park. The former Pabst brew house is being converted into an extended-stay hotel the Brew House Inn & Suites, which is slated to open in April.

The developers held an “Eco-Charette” in 2006, inviting local and national sustainability experts to meet at the Milwaukee Art Museum. That development team created guidelines for neighborhood-wide sustainability practices. The strategies involved brownfields clean up, the preservation of historic buildings, a diversity of project types, the recycling of old materials and energy efficient building strategies. The building council gave The Brewery high marks for walkable streets and stormwater management

The Zilber School building was also granted LEED Gold status, it was announced Tuesday. That is the second highest designation for sustainable building practices. The building was previously used as a hosiery factory, a cheese-making facility and for storing beer.

“I have to tell you, that this project, as much as we would like to view ourselves, the city, as the leader in sustainability...this was an occasion where it was clearly the developer who took this to the next level,” said Mayor Tom Barrett of Joseph J. Zilber at a press conference to announce the news.

“There are certain things that you’ll remember in your life, and as mayor one of the things that I will always remember is the phone call from Joe Zilber where he said, ‘I want this to be my legacy’ and ‘I want this to be something significant that I give back to my home city,’” Barrett said of Zilber, who died in 2010. “You don’t get many calls like that.”

The 360 State Street development, one and a half acres, in New Haven, Conn., and the 34-acre Hoyt Yards in Portland, Ore. were the other projects given LEED Platinum designations for neighborhood-sized developments.

Image: The Brewhouse Inn & Suites, due to open in April, by Journal Sentinel photographer Mike DeSisti.