Solar Plane to Fly the Globe 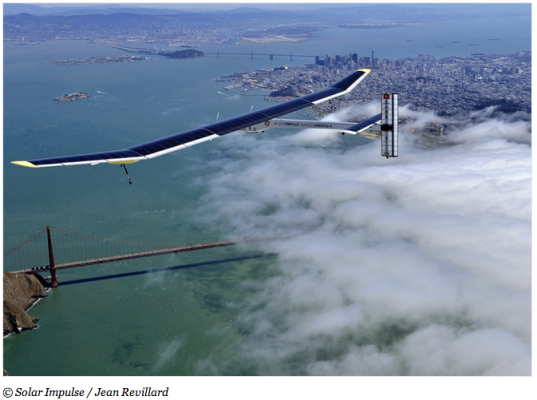 The ultimate goal of the Solar Impulse sun-powered plane is to fly around the globe powered by only the sun's rays. But before you can run, you have to crawl and then walk... So over the past few years, the Solar Impulse team has been reaching progressively more ambitious milestones. In 2010, the solar plane flew for 26 hours straight. In 2011, Solar Impulse flew from Belgium to Paris, France, and in 2012, a prototype completed the first intercontinental flight connecting Europe to Africa. The next challenge is to fly across the United States from the West coast to the East one.

The first leg from SF to Phoenix was just completed successfully. You can see updates and the schedule for the rest of the historic flight here.

There are many videos here.

A deep-blue array of 12,000 silicon solar cells stretches across the more than 60-meter wingspan, which is nearly as long as a Boeing 747’s. At 1,600 kilograms, the airplane weighs less than a compact car. The electricity-producing solar cells themselves are only 135 microns thick—the width of a human hair—yet they can convert more than 20 percent of the incoming sunlight into electricity, and more than enough for takeoff, powered flight and a daily recharge of the batteries that keep the plane aloft through the night.

Takeoff requires 10 horsepower from each of four electric engines, which is supplied by the solar cells and pre-charged lithium ion batteries [90kWh]. The engines are quickly throttled back to seven horsepower to climb and then as little as 2.5 horsepower per engine is required at cruising altitude where the plane flies at roughly 80 kilometers per hour. The plane climbs to 9,000 meters by mid-afternoon when the sun shines most abundantly and then, to conserve power, slowly descends to 1,500 meters over the course of the evening where it flies on battery power until the next sunrise, when the cycle repeats anew. "In order to stay airborne until the next sunrise it has to be that big and that light," Piccard explains. "We have calculated what we need in terms of energy, so that gave us the surface and it gave us the wing loading." (source)

The goal to fly around the world is scheduled for 2015 and will be attempted with the second generation solar aircraft currently under construction, HB-SIB.