Posted by EarthDude on Sunday, 11 August 2013 in Animals 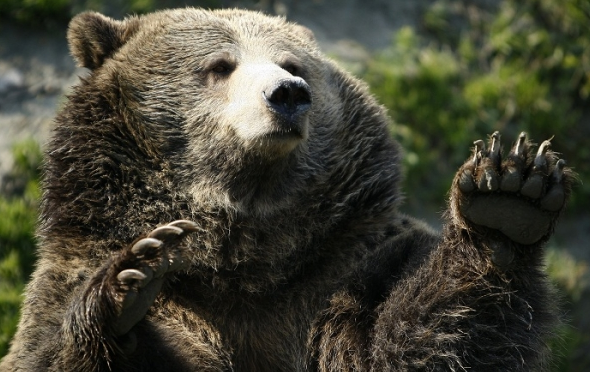 In testimony of the delicate balances that combine to form an ecosystem, a new study shows how the return of the wolf to Yellowstone National Park has led to a resurgence of a key portion of grizzly bears' diet: berries.

Published in the Journal of Animal Ecology, the study is one of the first to identify the interactions between these large predators based on complex ecological processes.

After wolves were removed during the early 1900s, elk herds were left to their own devices, ultimately leading to the demise of young aspen and willow trees along with many berry-producing shrubs and tall, herbaceous plants.

As a result, other animals suffered, including grizzlies who typically consume berries to put on weight prior to hibernation. Now, with the wolves back in action, shrubs are starting to recover as over-browsing elk herds have been trimmed down as a result.

In fact, the authors of the study report that the berries are so important to grizzly bear diet and health as to be considered in legal disputes regarding whether or not the bear's status of "threatened" under the Endangered Species Act should be changed.

"Berries are one part of a diverse food source that aids bear survival and reproduction, and at certain times of the year can be more than half their diet in many places in North America," said William Ripple, a professor in the OSU Department of Forest Ecosystems and Society, and lead author of the article.

All told, the researchers found that the amount of fruit in bear scat in recent years has nearly doubled for the month of August.

Also benefitting from the berries' return are pollinators such as butterflies, insects and hummingbirds, in addition to other mammals and birds who rely on them for food.

As a result, co-author Robert Beschta, an OSU professor emeritus, argues that while the wolf comeback story may be in its early stages, already evidence is strong that they play an important part of the system's overall success.

"Studies like this also point to the need for an ecologically effective number of wolves," he said, adding that the more they learn about "the cascading effects they have on ecosystems," the more they realize that the numbers game may be more of simply ensuring survival of the species.

"In some situations, we may wish to consider the numbers necessary to help control overbrowsing, allow tree and shrub recovery, and restore ecosystem health," he said.