Posted by stringer on Thursday, 26 September 2013 in Ocean/Seas/Coastlines

Thousands Turn out to Clean the Beach in Santo Domingo 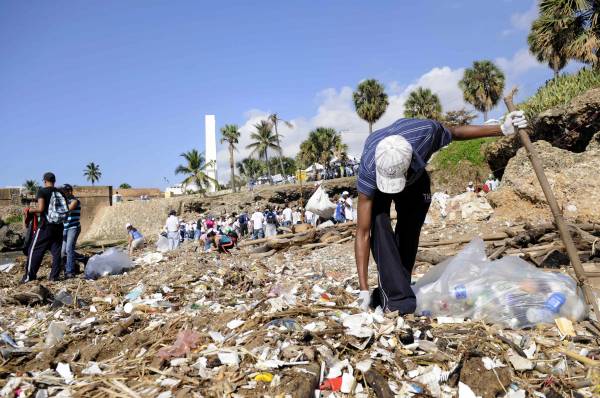 SANTO DOMINGO – Thousands of volunteers turned out for the 2013 International Coastal Cleanup, collecting trash at more than 90 beaches across the Dominican Republic.Environment and Natural Resources Minister Bautista Rojas Gomez, accompanied by representatives of more than 25 public agencies and private organizations, led the main trash pick-up Saturday at Montesinos beach in Santo Domingo.More than 20,000 volunteers showed up to collect trash at different beaches around the capital and in the provinces.The goal of the International Coastal Cleanup is to “create a culture of coastal protection and raise awareness among the people of the importance of keeping our coasts clean and healthy so we can protect and conserve coastal-marine biodiversity,” Rojas Gomez said.“This civic-environmental effort in which we are involved ... is a testimony to the great and solid interinstitutional and social support that Dominican society has given in recent times with the goal of continuing to strengthen the culture of protecting coastal and marine areas,” Rojas Gomez said.The Environment and Natural Resources Ministry, in cooperation with the Tourism Ministry, the armed forces, the navy, the National Police, the national emergency management office, the fire department, municipal governments, schools and other government and private entities, created the National Beach Cleaning Network in 2008.