Posted by jonehopp on Tuesday, 12 November 2013 in Climate Change 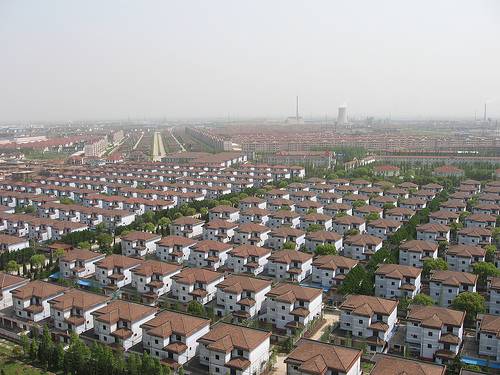 Take away the haze of air pollution and Waterfront Corso Mansions near Tianjin might seem like an urban idyll for China's growing population of city dwellers.

Inside a gated compound, residential towers and houses overlook a lake and manicured gardens. What's missing from the neighborhood are shops and amenities, turning the block and hundreds like it in the suburb of Meijiang into a giant dormitory for Tianjin, 40 minutes away by car.

"There's no hospital nearby, no hair salon, hardly any restaurants," said Wang Bo, 62, who lives with his daughter's family in the complex and ferries his wife to work each day. "I have to drive 20 minutes just to buy vegetables."

This is one of China's superblocks, developments that are storing up a social, energy and environmental crisis by forcing millions of new urban middle-class residents to drive everywhere. As China's ruling Communist Party convenes this week to debate an economic blueprint for the future, the Soviet-inspired urban plan pits municipal governments that rely on the land sales for a fifth of their revenue against Premier Li Keqiang, who is trying to balance urbanization with efforts to clean up the environment.

What the U.S. did in the 1950s with 160 million people, China is doing now with more than a billion -- moving to suburbia. Unlike the U.S. postwar sprawl, which mixed houses with schools, supermarkets and diners, the new Chinese commuters have to drive back to the city, or even across town for basic services, boosting energy consumption and emissions that have made the nation's cities some of the most polluted in the world.