Posted by Wolf on Tuesday, 12 November 2013 in Climate Change 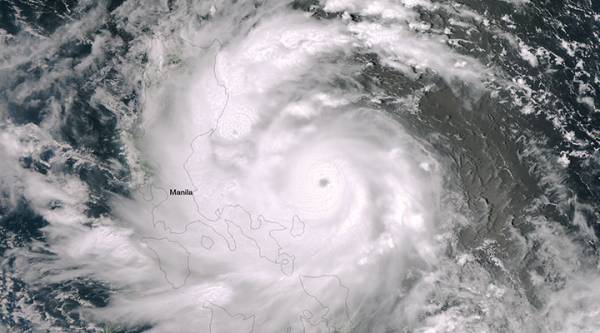 As the devastating storm has only just happened, it is too soon for any research to have been done on whether global warming influenced typhoon Haiyan. But there are good reasons for expecting that it has (see below). Furthermore, the tools exist to determine how much climate change may have intensified the typhoon. They have already been used on other extreme weather events, giving a clear scientific answer that climate change had dramatically increased the risk of heatwaves and floods, for example.

How could climate change affect typhoons?

Typhoons, hurricanes and all tropical storms draw their vast energy from the warmth of the sea. As Prof Will Steffen, at the Australian National University, says: "We know sea-surface temperatures are warming pretty much around the planet, so that's a pretty direct influence of climate change on the nature of the storm."

Another key factor is the temperature difference between sea level and the top of the storm, as this gradient is the heat engine that drives storm. Scientists think that climate change is increasing this difference.

Has scientific research made a link between climate change and more severe cyclones?

Yes. Prof Myles Allen, at the University of Oxford, says: "The current consensus is that climate change is not making the risk of hurricanes any greater, but there are physical arguments and evidence that there is a risk of more intense hurricanes." A Nature Geoscience research paper from 2010 found that global warming will increase the average intensity of the storms while the total number of storms will fall, meaning fewer but more severe cyclones. It also found that rainfall in the heart of the storms will increase by 20%.

A 2013 study by MIT's Prof Kerry Emmanuel agreed that the most intense cyclones – category 3 to 5 – will increase, but the work suggested smaller cyclones would also increase. It also found that "increases in tropical cyclones are most prominent in the western North Pacific", ie where typhoon Haiyan struck.

In 2011, a synthesis report from the Intergovernmental Panel on Climate Change concluded that the average wind speeds in cyclones are likely to increase, as was the frequency of heavy rainfall, but it noted the difficulty of linking changes in complex events like cyclones to climate change.

What does this mean for the loss of life and damage caused by the storms?

It will get worse. Rising sea levels already means that the storm surges – the huge waves that crash on to coastal areas and are the most deadly feature of cyclones – have a headstart. As climate change intensifies cyclones, the storm surges get bigger. The greater downpours during the cyclones also adds to the risk of flooding.

You said some extreme weather events can be directly linked to climate change. How is that done?

It is called attribution and uses detailed computer modelling to replicate the heatwave, flood or other meteorological disaster. Then the models are run again – often thousands of times, but without the additional heat in the system trapped by the greenhouse gases emitted from fossil fuel burning. The differences between the results shows the effect of climate change.

Allen said the influence of climate change on typhoon Haiyan could be calculated. "This is a question we could answer if we diverted the right resources to it," he said. "If we used the same tools as are used now to make seasonal weather forecasts, there would be a straightforward answer."

Allen said such attribution studies should be prioritised. "It's first things first: we should know now how climate change is affecting us rather than how it will affect us in 100 years' time. It is a common misconception that climate change affects everyone. It affects some people a lot and others not very much – but we don't know who is who."