Posted by CSea on Tuesday, 28 January 2014 in Earth Violators 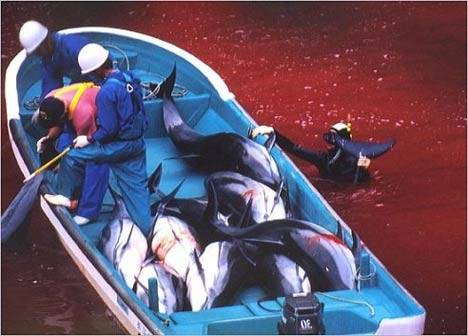 More than two dozen striped dolphins were slaughtered in the fishing town of Taiji, according to conservationists. Sea Shepherd, who was in the area monitoring the activity, reported that the dolphins were herded into a cove with tarpaulin coverings to conceal the slaughter.

The town of Taiji has been getting a lot of international criticisms for its claimed tradition of hunting dolphins. Boats set from Japan’s Pacific coast to look for pods of dolphins. Once found, the dolphins are herded towards a cove by creating a sonar wall with metal poles attached to their boats that they in turn, bang repeatedly. The boats are positioned in an arc to herd them into the bay and once there, nets are spread into the opening of the cove so the dolphins won’t be able to escape. Sea Shepherd member Melissa Sehgal told reporters that the fishermen are trying to conceal the slaughter so it wouldn’t be caught on camera, but “you can hear the dolphins splashing below” while the fishermen stab their spinal cords. She said that approximately 30 dolphins were killed that morning. She noted that since dolphin hunt season began on September 1, around 1,200 dolphins were herded into the cove, half of that number were already killed, while 149 have been taken into captivity. A representative from the town’s fishing association who refused to be named already confirmed the killings.

The dolphins are kept in the cove for many days, some are sold immediately for marine and aquatic establishments. The rest are killed for their meat, which some coastal towns in Japan include in their diet. Locals continue to defend their industry, saying that people who criticize it are hypocrites since they also eat the meat of pigs and cows. The same official told critics to “come and see the way they live”, as a dolphin hunt is the way they make a living. “I have to question why they don’t attack the killing of kangaroos or people who hunt deer for fun,” he further said.