Posted by plantitfilm on Thursday, 20 March 2014 in Climate Change

"What We Know" About Global Warming 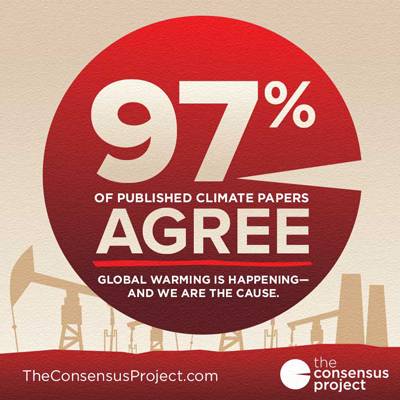 Climate change is real. The globe is warming. The data show it, the effects are already happening, and when you talk to scientists who study it, they all know it, too.

Yet the public still seems to be confused over it, mostly due to the confusion sown by professional confusers. Polls asking the public what degree of consensus climate scientists have about global warming consistently underrate it; the truth is that 97 percent of climate scientists agree that the planet is heating up and that human activity is the cause.

We—and by that I mean scientists and science communicators—are not getting through to the public.

That's why the American Association for the Advancement of Science—the world's largest general science society—has put together a public information campaign called "What We Know." (whatweknow.aaas.org) The motivation behind it is not so much to be a compendium of facts, but instead to "present key messages for every American about climate change" as a way to hopefully show people the reality of what we're doing to the Earth.

I think the idea behind the campaign is a good one. The problem right now isn't any scientific debate or controversy, for there isn't one. Virtually all the doubt and arguing are being instigated by politically motivated groups and do not exist among actual climate scientists. Getting this across to the public is a crucial step in ousting head-in-the-sand politicians and marginalizing the denial groups that are massively over-represented in the media.