Four Years After The Deepwater Horizon Oil Spill, The Gulf Is Still Suffering 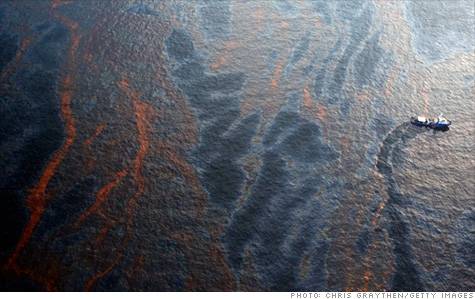 In his 34 years living in Louisiana, Ryan Lambert can’t remember ever seeing young, dead dolphins on his trips out in the Gulf. In just the last few months, however, he says he’s seen two.

Lambert, who owns a charter fishing company in Louisiana, told ThinkProgress he’s worried that the dying dolphins he’s still seeing point to lingering effects of the Deepwater Horizon disaster, which four years ago killed 11 people and spewed 210 million gallons of oil into the Gulf of Mexico.

“We still see little telltale signs,” he said. “There’s crabs with holes in their shells we’re seeing that we haven’t seen before, and I’ve never seen baby dolphins die.”

One study has linked the spill to dolphin deaths in the Gulf, finding that dolphins’ diseases in Louisiana’s Barataria Bay are rare but consistent with oil exposure. BP, however, has disputed that ongoing deaths and strandings are a result of the spill.

Still, in the four years since the BP oil spill, it’s clear some places in the Gulf are still reeling from the effects of the millions of gallons of oil and chemical dispersants that doused the water. On Cat Island in Baratria Bay, a habitat that was once thick with mangroves and hosted hundreds of pairs of nesting nesting pelicans, all that’s left now is “bones of black mangrove stumps” as the Times-Picayune reports. The island is also quickly eroding, a process sped up by the oil, which still lingers in the island’s marshy soil and has killed off the trees that help bind the soil together.

“We’re in a system in Barataria Bay that’s already facing severe erosion, but it was clear that as this oil came ashore, and it stressed or killed plants, it was entirely predictable that we would see a higher rate of erosion on those shorelines that got oil,” David Muth, Director of the National Wildlife Federation’s Mississippi River Delta Restoration campaign, told ThinkProgress. “So you’re compounding a problem that already existed.”

Muth’s team at NWF has been monitoring Cat Island carefully since the spill. Last year, he said, the island’s mangroves appeared to be dying, but there were still birds nesting on the island. But this year, there were no birds, and all the mangroves had died.

But Muth said he’s most worried about the characteristics of the oil that are among the hardest to measure. These volatile organic compounds (VOCs) — the compounds that form the sheen on the water during an oil spill and contribute to the spilled oil’s abrasive smell — wash up on shore and spread through the marine and land ecosystem, accumulating in plants and animals. The amounts of the VOCs accumulate as you go up the food chain, until you get to top predators, which may have significant levels of the compounds.

Muth said scientists likely won’t know the effects of the compounds for years, but in higher concentrations, the VOCs can lead to reproductive issues and possibly mortality in wildlife.

The NWF released a report this month that documented how the spill was still affecting Gulf wildlife, including dolphins, sea turtles, bluefin tuna and sea birds, a report BP disputed. But NWF scientists made clear that much of the research on the spill’s effects hasn’t yet been published due to the ongoing trials related to the spill, making accurate documentation of the spill’s effects difficult.

Other research is still ongoing. Samantha Joye, a professor at the University of Georgia who studied the effects the spill had on the seafloor and water column immediately after the spill, is staying in the Gulf for the month of April to look at whether the seafloor near the blowout site still show signs of degradation.

“No one has visited these sites in a human-occupied submersible since 2010, so we are very eager to evaluate the health of these locations firsthand,” Joye said in a release. “Populations of many organisms living in the water and on the ocean floor were seriously damaged by the blowout, so we want to know how things have changed since December 2010.”

Despite the ongoing impacts of the spill, Lambert is hopeful that the resiliency of the Gulf ecosystem will allow it to recover from the impacts of the spill. Muth said he thinks some of the land — like Cat Island — is likely too degraded to recover, but he wants Louisiana to rethink the way it manages the lower Mississippi River, so that the river can start building deltas again. It’s something he says the state is coming around to, but the NWF is still trying to find the funding and political will to implement some marsh restoration projects. Some of that funding, he said, could come from BP’s contribution to the Natural Resource Damage Assessment.

“We can’t say what’s going to wash away, but we can start building new marsh and start helping to sustain the existing marsh by putting river water and sediments into it,” he said. “It’s too late to go in and patch up this piece of shoreline and that piece of shoreline that got damaged, because it’s already a declining system. Instead, we need to find a way to get the system healthy again.”