Illegal Fishing in the US 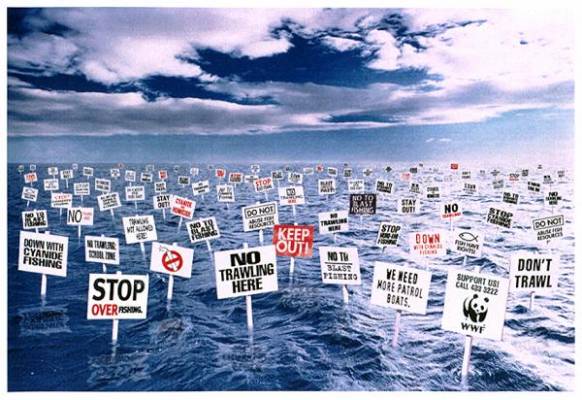 When people talk about illegal trafficking in wildlife, the glistening merchandise laid out on crushed ice in the supermarket seafood counter — from salmon to king crab — probably isn’t the first thing that comes to mind. But 90 percent of U.S. seafood is imported, and according to a new study in the journal Marine Policy, as much as a third of that is caught illegally or without proper documentation.

The technical term is IUU fishing, for illegal, unreported, and unregulated fishing. But such improbable allies as
members of the U.S. Senate now refer to it as "pirate fishing." And it ensnares seafood companies, supermarkets, and consumers alike in a trade that is arguably as problematic as trafficking in elephant tusks, rhino horns, and tiger bones.

Among the egregious violations, according to the study: Up to 40 percent of tuna imported to the U.S. from Thailand is illegal or unreported, followed by up to 45 percent of pollock imports from China, and 70 percent of salmon imports. (Both species are likely to have been caught in Russian waters, but transshipped at sea and processed in China.) Wild-caught shrimp from Mexico, Indonesia, and Ecuador are also more likely to be The European Union recently banned the importation of fish from Belize, Cambodia, and Guinea. illegal, and some illegal wild-caught shrimp may be disguised as farmed shrimp.

In recent months, government agencies and international maritime regulators have begun taking counter-measures to stop the illegal trade. Late last month, the European Union banned the importation of fish from Belize, Cambodia, and Guinea, alleging that those nations either sold flags of convenience — registrations having nothing to do with the location of the actual owners — or otherwise failed to cooperate in efforts to stop illegal fishing. The EU also issued "yellow card" warnings to Curaçao, Ghana, and South Korea.