Posted by kathy on Thursday, 17 July 2014 in Climate Change 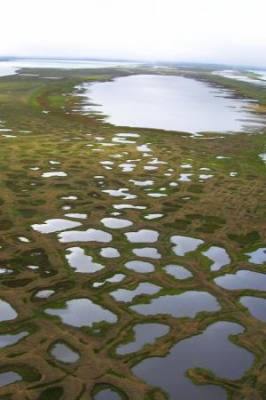 "Until now, we've only thought of thermokarst lakes as positive contributors to climate warming," says lead researcher Katey Walter Anthony, associate research professor at the UAF Institute of Northern Engineering. "It is true that they do warm climate by strong methane emissions when they first form, but on a longer-term scale, they switch to become climate coolers because they ultimately soak up more carbon from the atmosphere than they ever release."

Found in the Arctic and cold mountain regions, thermokarst lakes occur as permafrost thaws and creates surface depressions that fill with melted fresh water, converting what was previously frozen land into lakes. Researchers observed that roughly 5,000 years ago, thermokarst lakes in ice-rich regions of North Siberia and Alaska began cooling, instead of warming the atmosphere.

Researchers found that "thermokarst basins switched from a net radiative warming to a net cooling climate effect about 5000 years ago," according to their article, published online today. They found that high rates of carbon accumulation in lake sediments were stimulated by several factors, including "thermokarst erosion and deposition of terrestrial organic matter, […] nutrient release from thawing permafrost that stimulated lake productivity, and by slow decomposition in cold, anoxic lake bottoms." "These lakes are being fertilized by thawing yedoma permafrost," explained co-author Miriam Jones, research geologist for the U.S. Geological Survey. Yedoma is a type of permafrost that is rich in organic material. "So mosses and other plants flourish in these lakes, leading to carbon uptake rates that are among the highest in the world, even compared to carbon-rich peatlands."

The study also revealed another major factor of this process: Researchers found that when the lakes drain, previously thawed organic-rich lake sediments refreeze. The new permafrost formation then stores a large amount of carbon processed in and under thermokarst lakes, as well as the peat that formed after lake drainage. Researchers note that the new carbon storage is not forever, since future warming will likely start rethawing some of the permafrost and release some of the carbon in it via microbial decomposition.

As roughly 30 percent of global permafrost carbon is concentrated within 7 percent of the permafrost region in Alaska, Canada, and Siberia, this study's findings also renew scientific interest in how carbon uptake by thermokarst lakes offsets greenhouse gas emissions. Through its data collection, the study expanded the circumpolar peatcarbon pool estimate for permafrost regions by more than 50 percent.