Posted by stringer on Thursday, 21 August 2014 in Wildlife Conservation

Moving 500 Rhino to Save Them 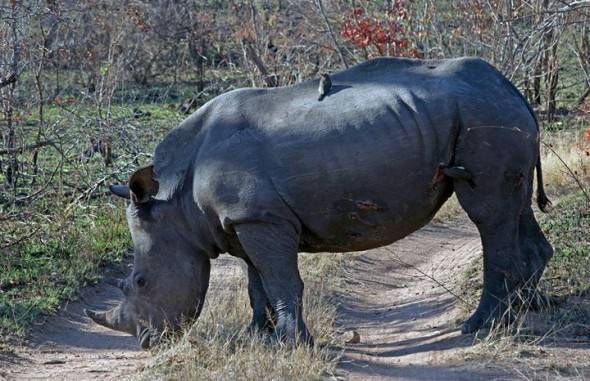 The assault on South Africa’s rhinos has become so catastrophic that a large-scale emergency program is underway to evacuate a minimum of 500 of the endangered animals to safe havens. The move forms part of what the authorities call an “integrated strategy” to head off poachers that are slaying the iconic animals for their horn, which is prized in Asian markets for spurious healing powers or as a flashy symbol of conspicuous consumption. (For background to the poaching crisis, maps, and photos, read the National Geographic feature “Rhino Wars.”)

Ground zero of the rescue operation is Kruger National Park, home of nearly half of South Africa’s estimated 21,000 rhinos. Bordering on Mozambique, the 20,000 square-kilometer (7,722-square-mile) flagship wildlife sanctuary has been pounded relentlessly by poachers from across the boundary.

Already 631 rhinos have been killed in South Africa so far this year, 408 of them in Kruger. This despite a burgeoning security operation inside the park involving army and police units working with combat-trained rangers, all under supreme command of retired South African Defence Force Major-General Johan Jooste.

With the rhino death toll threatening to surpass last year’s record 1,004, the specter of the species being poached into extinction is about to become reality. Sam Ferreira, South African National Parks’ (SANParks) large-animal ecologist, explains that the animals’ natural mortality rate of 2 percent plus poaching deaths of 6 percent now equals the annual birth rate of 8 percent, meaning that the population has reached tipping point.

The implications of rhino numbers starting to drop in South Africa are dire. The country is the species’ main bastion in Africa, and indeed on the planet. South Africa is home to 93 percent of Africa’s white rhino and 39 percent of its black rhino. But with the country struggling with the onslaught from increasingly-better equipped poachers and the international crime syndicates that hire them, South Africa is now also turning to neighboring states to provide havens for at least some of its rhinos.

Moving from High-Risk to Lower-Risk

About half of the 500 animals to be relocated will be moved from high-risk to lower-risk areas inside Kruger Park. Areas regarded as high-risk are mostly in the densely vegetated zone along the eastern boundary with Mozambique which offers handy cover and easy entry and escape to insurgents, while less risky areas are in the more open and better secured region farther to the western side of the national park.

Rhinos will also be moved from Kruger to other parks and private game reserves that can serve as “strongholds” inside South Africa. The remainder of the 500 earmarked for special protection will be offered to neighboring countries, notably Botswana and Zambia, with which negotiations are already in progress to put up some of the animals. Only countries that are historically home to rhinos and which can offer sufficient assurance that the animals will be well protected are being considered.

According to Ferreira, the translocation has a dual purpose. Apart from getting the animals out of harm’s way, there is the additional benefit that they tend to breed more readily in areas of low-density rhino population than in higher-density places where they seem to have a natural tendency to curb their fecundity.

These latest initiatives to shore up the survival of wild rhinos were directed by the South African cabinet and announced at a media briefing in Pretoria this week by Minister of Environmental Affairs Edna Molewa. The national police commissioner, General Riah Phiyega, attended the briefing, underscoring the multi-pronged nature of the anti-poaching strategy.

The briefing also suggested that the South African authorities have renewed their resolve to take the fight to the poachers and the smuggling syndicates. Part of this is the creation of what is called an “intensive protection zone” in Kruger Park. It covers an area adjoining the Mozambique boundary that has been seeing the heaviest incursions. The intention is to deploy the best technology and resources to get at the poachers. “We want this to become a bad place for them to go,” Ferreira said.

A remarkable disclosure by Phiyega was that South Africa has come to a “hot-pursuit” agreement with Mozambique, allowing Kruger’s security personnel to chase poachers even after they had crossed the international border. The ease with which culprits could escape simply by crossing back into their own country has constantly frustrated the park’s law-enforcement officers. Some poachers even had the temerity of waving at Kruger’s enforcement staff once they were safely across the border.

From what the police commissioner said, there has indeed been a significant improvement in co-operation with Mozambique. The country’s earlier attitude was such that it was ordered by CITES (Convention on International Trade in Endangered Species) to report on what it is doing to help curb the poachers and smugglers raiding Kruger. Now Mozambique has tightened its animal-protection laws and instructed its security leaders to work more closely with their South African counterparts.

A vital further component of the “integrated strategy” is to win the hearts and minds of impoverished Mozambican communities adjacent Kruger. It is from these communities that most of the poachers are recruited by the crime syndicates, and which serve as staging posts and hiding places for contraband. The idea is that by creating new work and income opportunities for them, these communities will be more willing to resist or turn against the criminals and, instead, help curb the poaching activities.

Included in South Africa’s strategy to save the rhino is a diplomatic campaign to solicit help from rhino-horn consumer countries like China, Vietnam and others in the Far East by clamping down more tightly on the smugglers and the illicit trade in those nations. South Africa is negotiating memorandums of understanding with each of the countries individually.