Posted by miguel on Sunday, 05 October 2014 in Animals

Yellow-billed cuckoo to be listed as threatened 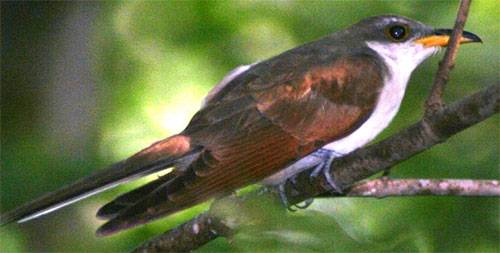 A large bird known to nest in wetlands along the Santa Ana and Colorado rivers will be protected under the Endangered Species Act, federal wildlife officials announced Thursday.

The western population of yellow-billed cuckoo will be listed as threatened with extinction because its habitats along rivers and other waterways has greatly declined in 10 western states, according to the U.S. Fish and Wildlife Service.

In Riverside County, the birds have been seen in wetlands in the Corona-Norco area above the Prado Dam, as well as along the Colorado River.

“It is a really a cool bird,” said Ileene Anderson, biologist with the Center for Biological Diversity, a Tucson based-group that argued for its protection.

The cuckoo is about the size of crow, standing as high as 10 inches. In fact, some have called it a “rain crow” because it is known to cluck shortly before rainfall.

It’s carnivorous, dining on insects and the occasional frog or lizard, Anderson said. And it spends its winters in South America.

The yellow-billed cuckoo was once abundant in the western United States, but its populations have dropped over decades because of the loss and damage to its wetland habitats, according to the wildlife service.

Their nesting grounds have been grazed and converted to crop fields. These birds also have lost habitat through dam construction, river diversions, and the introduction of non-native plants, the service said.

The listing will be official Nov. 3. The next steps will be to identify critical habitat areas for protection, and to develop a recovery plan, the service said in a press release.

Development is restricted in critical habitat areas. But Anderson does not expect conflicts with developers in Riverside County, because the bird has been seen in areas already protected for other species of wildlife.