Posted by bjb41 on Tuesday, 06 January 2015 in Ocean/Seas/Coastlines

Can Technology Save Our Oceans? 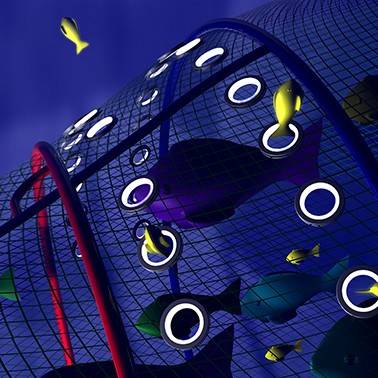 In recent years the double whammy of plastic trash and overfishing has drawn more attention to the plight of the world’s oceans. But another problem is that too many fishing vessels dump their gear, mostly fishing nets, which then endanger marine life long after they return to shore. This “ghost gear” will remain in the waters for centuries, causing “ghost fishing” that kills even more marine life. Technology, such as improved GPS mapping of the ocean floor, could help make a difference the needless killing of fish and sea mammals.

To that end, over forty delegates recently convened in Slovenia to launch the new Global Ghost Gear Initiative (GGGI). Bringing together NGOs, industry leaders and intergovernmental organizations, GGGI’s aim is to save one million marine animals by 2018. The cost in money and resources is too large to ignore: United Kingdom-based World Animal Protection estimates 640,000 tons of fishing gear, mostly plastic or nylon, are pitched into oceans annually. Just one ghost net can kill $20,000 of Dungeness crab over 10 years.

The results are lost economic opportunity and more destruction as unwanted nets, traps and pots harm and kill marine life. NGOs are dedicated to cleaning up the oceans of this killer trash, and some companies are collecting this garbage and recycling it into new products—but they are fighting a losing battle. The complex problem of ghost gear has many moving parts—and more cooperation is needed.

Delegates at last month’s meeting agreed that at first, the GGGI must have solid and reliable evidence and data to start raising awareness. That may sound like a dry and tepid response to a pressing environmental and economic problem, but in order to create a sense of urgency, reliable information is urgently needed. Many estimates of ghost gear in the oceans, along with statistics covering wildlife killed annually, are based on samples taken in a few spots around the word. Business and governments, however, will want more concrete information before they commit resources to fight this continuing problem.

Likewise, the question of how to solve the ghost gear crisis depends on how GGGI will conduct outreach, and who it will hold accountable. The common perception is that fishermen simply create this problem by dumping unwanted equipment into the water. The truth, however, is much more nuanced. Tonny Wagey, an Indonesian government marine scientist, offered his perspective as GGGI’s inaugural meeting concluded.

“Environmentally and politically, the problem is the lack of understanding, awareness and political will to deal with this,” said Wagey. “The main culprit is illegal fishing. After all, the local and small fishermen don’t want to lose their nets because the replacement cost is two or three months of their wages. It’s the big companies that are often responsible, especially those who are coming from outside our country to fish illegally.”

Wagey’s perspective is one coming from Indonesia, the world’s fourth largest seafood producer with about 4.8 million tons caught, processed and sold annually. Hence one risk GGGI confronts is the developed vs. developing nations schism that affects many an international organization across all sectors. Considering the fact emerging economies such as Indonesia and Thailand are among the world’s biggest fishing producers, the challenge GGGI will find is scoring cooperation from stakeholders across all countries.

What countries all need is an improved visibility of the ocean floor. The Boston Globe has profiled the troubled New England lobster industry, which has been long frustrated by current technology’s inability to locate ghost gear off the northeastern U.S.’s coast.  In Indonesia, a boat could be continuing its daily routine, only to graze a reef or rock outcropping no one knew about, even if that knowledgeable fisherman followed generations before him into this line of work. The world’s large fishing companies should take on the responsibility of developing and researching better technology that in the long run, will help sustain the global fishing industry and keep it profitable.

Businesses cannot ignore the mounting size of this crisis and stand by while a few do their part to tackle the problems of ghost gear. One of them is Aquafil, a manufacturer of recycled carpet and textile fibers and one of the event’s sponsors. The company’s representatives gave me a tour of one of its warehouses. About a 45 minute drive from Ljubljana is a renovated cotton mill bursting with nets gathered from around the world. Bales of used and discarded fishing nets, each weighing four metric tons, offered a disheartening visual that reminded me of the daunting statistics I heard over the previous 36 hours.

Some good first steps were proposed during this inaugural GGGI meeting. For example, color-coding nets for easy identification could be a way to identify wayward fishing companies. Tagging nets to identify these giant nets more easily is another option. Aggressive education programs also must be part of this equation. Better design always leads to more sustainable solutions, which leads to technology: maps from a service such as Google, as well as apps, cannot be overlooked.

In the end, if the commercial fishing industry becomes more engaged, GGGI will be off to a fast start. In an age where a “tell all” video timely posted online give a company gigantic headaches, no business wants to be embarrassed—or lose loyalty from customers who over time have become more interested in how their food is sourced. The time to start addressing this problem, sadly, was yesterday: but based on the cooperation and ideas I saw coming out of Slovenia, GGGI is on a fast track to solve a problem that will only complicate matters in a growing, and hungrier, world.