Posted by WaterMojo on Wednesday, 23 September 2015 in Clean Water

A silver lining to a toxic orange legacy? 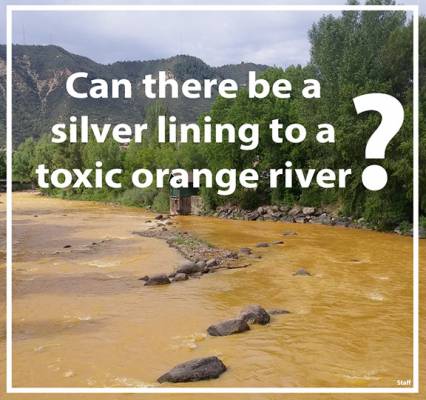 The spill forced the city of Durango to close its drinking water intake, and local business that depend on the river were shut down for weeks. The spill traveled through Colorado into New Mexico and Utah, creating concerns for drinking water, crops, and wildlife all along its path.

The orange river made international news, but it also helped highlight a problem that is long overdue for a solution. Hard rock metal mining is the most destructive industry in the world. According to the U.S. Environmental Protection Agency’s Toxics Release Inventory, metal mining is the nation’s top toxic water polluter.

Mining in the western United States has contaminated headwaters of more than 40 percent of the watersheds in the West. Remediation of the half-million abandoned mines in 32 states may cost up to $35 billion or more.

The main reason for this wide-scale degradation of our waterways is an antiquated law that still governs hard rock mining throughout the country. The 1872 Mining Law allows foreign and domestic companies to take valuable minerals from our public lands without paying any royalties, and it still allows public land to be purchased and spoiled for mining at the 1872 price of less than $5 an acre — that’s the price of one mocha for an acre of public land.

This outdated law contains no environmental provisions, allowing the mining industry to wreak havoc on water supplies, wildlife and landscapes. For example, abandoned mines are still leaking 540 to 740 gallons a MINUTE of acid drainage into the Animas River headwaters, degrading miles of the watershed. This was the case before the Gold King Mine spill and is still the case after the spill, and there are many more examples throughout much of the West. In fact, it’s estimated that there are half a million abandoned mines throughout the nation.

While the Animas River spill was a tragedy of the first order — and some polluters friends in Congress want to turn it into a witch-hunt of the Environmental Protection Agency — the spill should be the much-needed motivation to enact a solution to clean up after mining’s toxic legacy.

The Hardrock Mining Reform and Reclamation Act of 2015 (HR 963) would fix the problem, but, unfortunately, due to the current political situation in both houses of Congress, this bill has basically zero chance of getting passed. And we need action now because several proposed mines throughout the country could be approved before a real solution to mining’s toxic legacy is passed by Congress.

The Pebble Mine in the headwaters of Alaska’s Bristol Bay, Upper Peninsula Mine near Lake Michigan, Black Butte Mine on Montana’s Smith River, and the Canyon Mine near the Grand Canyon are just a few examples of proposed mines that could wreak havoc on local ecosystems and potentially contaminate watersheds for generations to come.

People from across the country travel to raft and fish in these rivers and lakes. It's time to protect them from toxic mining pollution. Tax payers are bearing the brunt of cleaning up after the mining industry through superfund designation and other federal funding programs. Using public funds to clean up after a toxic industry, while at the same time allowing that industry to continue to create new mines, is unacceptable. Since Congress won’t do what’s needed, our president should act quickly and decisively.

President Obama has the authority to put a moratorium on all new mines near our waters on public lands.  The mining industry should not be allowed to use our public lands to build new mines in and around our cherished waterways until it cleans up from past mining operations. Please tell President Obama to reject all new mine proposals near our rivers until the mining industry cleans up its act. Let’s find the silver lining to the toxic orange river. Please add