When You Mess With Salmon, You're Messing With Alaskans 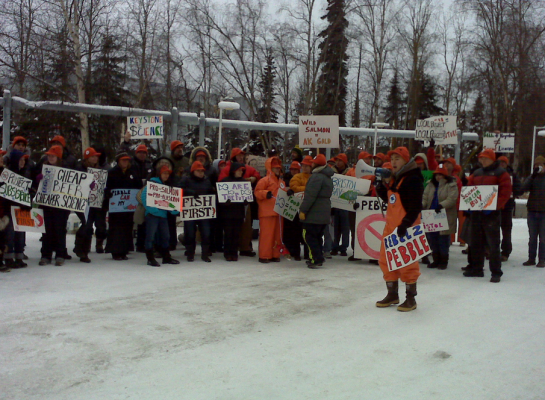 Last month I had the opportunity to visit Dillingham, Alaska — a town with no traffic lights, no movie theatres, and a population that could fit comfortably in a single New York City high-rise. I had to fly there, because no roads lead to Dillingham. Although the town isn’t quite the western edge of North American civilization, it’s not far off.

Yet for two months every summer, this tiny outpost in the crook of Bristol Bay transforms into the epicenter of a vast industry: the world’s largest sockeye salmon fishery. An average of 37 million sockeye return to the Bristol Bay watershed to spawn each June and July, a natural phenomenon that supports not only brown bears and bald eagles, but a human ecosystem as well. Native Alaskans in Dillingham, Naknek, and other communities depend on the influx of salmon as a vital source of food, and commercial fishermen from across the lower 48 states flock to Bristol Bay to share in the abundance.

The fruits of their labor wind up on your plate: If you’ve ordered wild Alaskan salmon in a restaurant or at your local seafood counter, you’ve likely eaten Bristol Bay sockeye. Delicious, right?

Now this bounty — along with the $1.5 billion industry it supports, the 14,000 jobs it provides, and the thousands of traditional lifestyles it sustains — is threatened by the proposed Pebble Mine, a massive copper, gold, and molybdenum mine planned for the headwaters of Bristol Bay’s most productive salmon rivers.

During my time in Dillingham, I met dozens of native Alaskans, commercial fishermen, and local business owners who are committed to preventing the mine’s corporate masters from ever breaking ground. And while I may be a few days late to the Independence Day party, I don’t think it’s a stretch to call the fight against Pebble Mine a struggle to preserve democracy, freedom, local autonomy, and other quintessentially American values that we’ve been celebrating on July 4 for 237 years.

Any way you slice it, Pebble Mine is a terrible idea. According to the Environmental Protection Agency’s Bristol Bay Watershed Assessment, the mine would destroy up to 90 miles of critical salmon streams, eliminate up to 4,800 acres of wetlands, and generate lakes of acidic waste. These enormous toxic ponds would have to be contained — forever — behind Washington Monument-sized earthen dams in a “wet, sensitive and seismically active area.” Should copper leach into the streams around the mine — a distinct possibility during even routine mining operations, according to the EPA — the ecological results could include "rapidly induced death of many or all fish." Little wonder that 88% of Bristol Bay residents, and 68% of Alaskans, oppose the project.

Not only would Alaska’s fisheries suffer as a result of Pebble, the United States wouldn’t even reap most of the mine’s benefits. That’s because Pebble Limited Partnership, the conglomerate that’s trying to develop the mine, is actually composed of two foreign corporations: the Canadian-owned Northern Dynasty Minerals and the British mining giant Anglo American, accused of human rights abuses in South Africa, Ghana, the Philippines, and pretty much everywhere else the company operates.

In most countries, when a rapacious foreign mining interest wants to dig a giant hole in the ground, it’s a done deal, no matter how many lives are ruined and how much land is despoiled in the process. In Peru, for example, Chinese and American gold mining companies have depleted farmers’ water supplies and forced villages to relocate. When citizens object, hired police crush protests with tear gas and bullets.

As Hal Herring put it in a recent op-ed, if the Pebble deposit was situated in almost any other nation, “The mine permits would be paid for in some unpublicized handshake deal, and the mining would begin, and to the Devil with the people, the salmon, and the rest of the consequences."

But here in the United States, our democracy, however imperfect, provides institutions capable of registering citizen dissent and defending the public interest. When the Environmental Protection Agency’s assessment of the mine was opened to public comment, for example, over half a million people wrote in — nearly 70% of whom objected to the mine (Koch-funded astroturfing be damned). That staunch public opposition is in large part why, despite over a decade of mineral exploration, Pebble hasn’t even released its official mining plans.

Too often, battles that pit conservation against mineral extraction are framed as conflicts between liberals and conservatives. But here in Alaska, many of the mine’s opponents are staunch libertarians who believe that the people of Bristol Bay have the right to determine how their resources are developed and their environment altered. Indeed, Pebble is such a bad idea that it's turned Alaskans — notorious for their distaste for the federal government — into cheerleaders for the EPA, which many hope will step in and unilaterally deny the project under a provision of the Clean Water Act.

The struggle against Pebble Mine transcends political boundaries — at its core, it’s a fight that pits communities trying to decide their own fate against foreign powers seeking to extract American wealth. The week after Independence Day, that should sound familiar.