Posted by amir on Tuesday, 11 October 2011 in Ocean/Seas/Coastlines 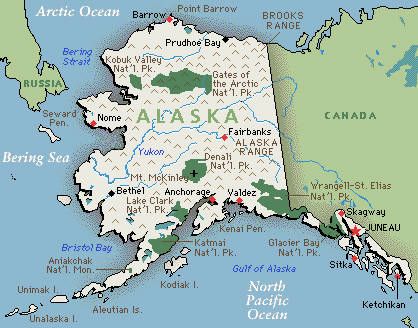 Alaska has given up local input on federal projects off state shores, according to a coalition of lawmakers from coastal boroughs. And absent leadership from the Alaska Legislature, they're determined they have a say on development that's proposed -- or planned.

Juneau Mayor Bruce Botelho and others believe that when the coastal zone management program expired this summer, the state lost its legal authority to have a say in federal ventures -- including mining, timber harvests on federal land and offshore oil development -- proposed along Alaska's 6,640 miles of coastline.

Botelho and others from Southcentral and Southeast Alaska filed paperwork last week with Lt. Gov. Mead Treadwell, who's responsible for state elections, to launch a citizens initiative aimed at establishing a new Alaska Coastal Zone Management Program. Coastal management has proven one of the most acrimonious debates of the Alaska Legislature's current two-year session.

Lawmakers weren't able to extend or renew the program during the regular session. Attempts at addressing coastal management failed during a special session called by Alaska Gov. Sean Parnell. As the clock ticked toward the program's expiration on June 30, state senators rallied to call a second special session to keep it alive. But a lack of support among House lawmakers -- and some say from the Parnell administration -- doomed coastal management, leaving Alaska as the nation's only coastal state to lack a voice on federal onshore or offshore plans proposed here.

At issue: who in the state should have final "local" input over developing Alaska's coasts -- locals themselves, who claim to be most knowledgeable of their back yards, or state policymakers? Gov. Parnell favors stronger state authority and sees Alaska's shoreline natural resources as a "state asset," according to a discussion about coastal zones earlier this year. Influential lawmakers in rural Alaska want local authority over any proposed development in their boroughs or on their shores, despite state or federal ambition.

It's these divisions -- coupled with support at the local level for input -- that galvanized Botelho, a former state attorney general, to take the lead on drafting a citizens initiative, he said during an interview after Monday's press conference.

"We believe Alaskans need a voice in managing their coastlines. I watched with interest the efforts within the Legislature to find a solution" during the last regular and special sessions. "Comments made during the legislative sessions made it appear highly unlikely" that lawmakers would find consensus on this program, which impacts the "management and enhancement of the overall quality of coastal environments for this and succeeding generations," Botelho said.