Posted by lyonsjg76 on Sunday, 28 January 2018 in Environmental Heroes 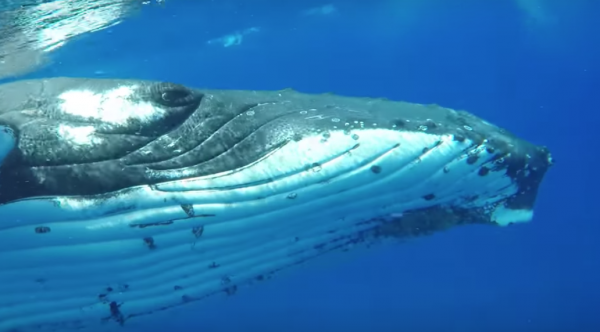 Nan Hauser, a marine mammalogist in the Cook Islands, thought she was being harassed by a 50-foot humpback whale on a dive off the island of Rarotonga. That was until she saw a dark figure swimming below, anyhow.

The grey shape was so big — 20 feet long — she thought it must belong to a Cuvier’s beaked whale. But when she noticed its tail was moving side to side, not up and down like a whale’s, she knew it was a large shark. And so did the male humpback whale, which was apparently trying its damnedest to protect her.

you can see the video here

Though the dive off Muri Beach took place on September 14, Hauser just released the footage to the public this week, and it has reached every corner of the Internet. Hauser’s life as a biologist was documented in the 2005 movie “Footprint on the Water.”

“When he saw me, he swam right toward me and pushed me through the water with his head,” said Hauser, 63, who has lived on Rarotonga for two decades and studies the dozens of whale species in South Pacific waters. Hauser tried to get away but could not. She hoped the whale would not open its mouth or bump her with a flipper, which could cause bone-breaking or organ-rupturing injuries.

Humpbacks are known to protect seals from attacks by killer whales — a behavior known as altruism. But they’ve never been documented protecting humans until. When marine biologists saw the footage, “They all flipped out,” Hauser says.

“Whales will protect other species at the risk of their own life, but no one’s ever seen one do this to protect a human, so I feel pretty privileged,” she says. There was also a female humpback in the area, who was slapping her tail against the water, an act Hauser also took to be an alarm signal.

At this point, because of the commotion caused by the whale, Hauser still had not seen the shark. The male then pushed her out of the water with its head, and flipped over so that she was on its chin, and flipped over again so that they were eye to eye. “He’s just staring at me, just trying to tell me something. We call that eye-widening.”

“For the last 28 years, I always say when you look into the eye of a whale they know something we don’t,” she says.

The whale then repeatedly tried to put Hauser under its pectoral fin. “I thought I might drown,” she says. The whale pushed Hauser toward her boat. It was only then that she made out the third grey figure in the water, which she initially mistook for a smaller whale.

“It’s this big honking tiger shark coming at me,” she says. The whale stayed at her side until she climbed back aboard the boat. Safely on board, Hauser put her face in her hands and wept, then laughed. “I was so emotionally confused.” The male repeatedly cruised by the boat, Hauser says, to make sure she was alright.

The story doesn’t end there. Four days later, while filming for the sequel to “Footprints on the Water,” Hauser jumped in the water with a humpback off Rarotonga. It was the female who was in the water during the earlier encounter. The female, who Hauser dubbed Suzie, swam right up to Hauser, then deep down. Hauser looked into the blue and saw the whale swimming up to her from directly below.“She comes up, and we’re belly-to-belly,” Hauser says. “She puts her flippers around me and hugs me…If anyone ever told me that a humpback hugged them I would tell them they were so full of it,” she says. Tears fell inside of Hauser’s dive mask.

Hauser’s team then followed the female 7 miles offshore, where she breached numerous times. The scientists bid the whale adieu. “I said, ‘Bye Suzie, thank you for protecting me. Have a safe journey to Antarctica.’”